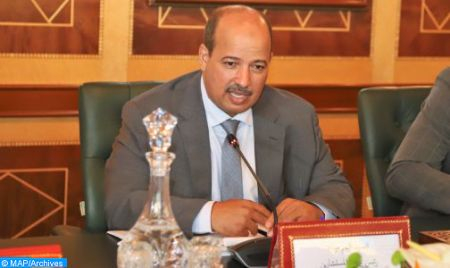 Speaker of the House of Advisors, Naama Mayara, held talks on Thursday in Rabat with the ambassador of the Republic of Korea to Morocco, Keeyong Chung. During the talks, Mayara welcomed the excellent level of the long-standing and solid relations between the Kingdom of Morocco and the Republic of Korea, marked by fruitful cooperation, said a statement by the upper house, recalling that the two countries celebrate this year the 60th anniversary of the establishment of their relations. The speaker of the House of Advisors highlighted the democratic and development model in Morocco, led under the leadership of HM King Mohammed VI, the same source added, stressing the importance of the geostrategic positioning of Morocco which is an incentive for the Republic of Korea to explore new markets on the African continent. Mayara reviewed the new composition of the House of Advisors after the Constitution of 2011, while expressing the willingness of the upper house to consolidate its partnership with the National Assembly of the Republic of Korea. Regarding the national cause, he highlighted the support of the international community to the Moroccan autonomy initiative as a fair and sustainable solution to end this artificial regional conflict within the framework of the sovereignty of the Kingdom, its national unity and its territorial integrity, welcoming in this regard the consistent position of Korea on the issue of the Moroccan Sahara. For his part, the South Korean diplomat stressed the strength of bilateral relations, reiterating the support of his country to the major development projects of the Kingdom which represents a traditional partner of the Republic of Korea. He also stressed the importance of parliamentary cooperation to seize the great opportunities and capacities available to both countries to diversify economic relations, develop trade and raise them to high levels in many areas.