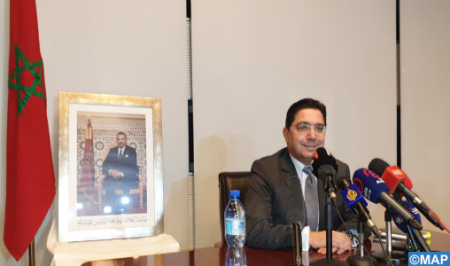 Morocco’s action within the African Union (AU) over the past five years has been guided by a reference framework set out by HM King Mohammed VI, said on Saturday, in Addis Ababa, Minister of Foreign Affairs, African Cooperation and Moroccans Abroad, Nasser Bourita, who represents the Sovereign at the 35th ordinary session of the Summit of the pan-African organization. This summit takes place five years after Morocco’s return to the African Union, underlined Bourita, recalling His Majesty’s historic speech in 2017 at the AU headquarters in Addis Ababa in which the Sovereign said: “You will see: as soon as the Kingdom becomes a member and is able to contribute to the agenda of activities, its action will, on the contrary, help bring about unity and progress. The actions of the Kingdom within the AU are in line with these instructions given by the Sovereign, noted the minister, recalling the key role played by the Kingdom in initiating a collective African awareness on the need for joint action since the Casablanca conference sixty years ago which was the starting point for African unity. In 1961, the meeting of the Casablanca group, which was a framework for reflection on coordination between the countries of the continent, was the basis on which the Organization of African Unity was founded, before the creation of the African Union,” the minister told reporters. Mr. Bourita noted that this 35th AU Summit also takes place in a context where the African continent is aware of several positive developments, but also shortcomings. “Today, we are witnessing important developments in the free trade area, in the African security architecture, as well as in several issues on which Africa now speaks with one voice by coordinating its positions. But at the same time, there are security challenges, including instability in several countries, the return of coups d’état in some regions of the continent, as well as the scale of the terrorist threat”, noted the minister. “Nearly a quarter of terrorist attacks in the world hit the African continent. Out of the ten countries most exposed to terrorism in the world, seven of them are in Africa”, said Bourita, noting that “the rapprochement between separatist groups and terrorist groups in many regions of the African continent constitutes a threat to the stability of countries and several regions”. With regard to the COVID-19 pandemic, the minister noted that the vaccination rate in Africa does not exceed 10% while the continent represents nearly a quarter of the world’s population and is experiencing significant demographic dynamics, noting that Morocco is now a leading country in Africa in terms of vaccination, where the percentage of Moroccans who received the second dose of the COVID vaccine reached 67%. The minister recalled in this regard that HM King Mohammed VI recently launched the construction works to build a manufacturing plant for Covid-19 vaccines and other vaccines, a structuring project which, in the long term, will contribute to ensuring the vaccine sovereignty of the Kingdom and of the African Continent as a whole. This industrial unit is part of the South-South Cooperation Vision advocated by the Sovereign and intended to position the Kingdom as a hub capable of meeting the health needs of the Continent. On the Moroccan participation in this Summit, Bourita stressed that the Kingdom is determined to continue implementing the content of the 2017 Royal Speech by focusing on the real African agenda which reflects the main concerns and challenges of the continent. In this regard, Morocco has accumulated experience and contribution to all the issues raised, he said. Regarding the issue of food security, placed at the heart of this summit, Morocco has significant experience in this area. The Kingdom has developed several agricultural programs over the years, including Morocco’s Green Plan and the Green Generation Strategy 2020-2030, underlined Bourita, recalling that the Kingdom is one of the world’s leading producers of fertilizers, which are an essential element in achieving food security on the continent. “Today, Morocco can, through its experience and expertise, contribute to the achievement of the continent’s objectives in this area,” the minister reiterated. Referring to the theme of migration, the minister announced that a report by HM the King, as Leader of the AU on migration issues, will be presented to the AU Summit. This report, which will be presented on Sunday on behalf of HM the King, demonstrates that the problem does not lie in African migration, but in the vision and perspectives on this migration. This report, said the minister, also explains how Africa, which represents only 14% of the migrant population worldwide, is accused of being the one that invades other countries and continents, noting that only three African migrants out of four remain on the African continent, in neighboring countries, while only one migrant can consider going to Europe where all this debate on African migration takes place. This report will be presented on the subject after the opening in Rabat of the African Migration Observatory as the first institution of the African Union based in the Kingdom of Morocco, noted the Minister.