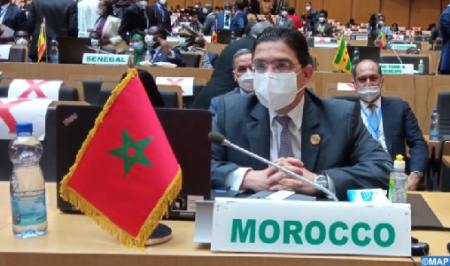 The reports of the African Union (AU) this year do not contain any reference to the Moroccan Sahara issue, said Saturday in Addis Ababa the Minister of Foreign Affairs, African Cooperation and Moroccans Abroad, Nasser Bourita. In three reports in which the issue of the Moroccan Sahara was often mentioned, there was no indication of the national cause, noted Mr. Bourita during a press conference held at the AU headquarters on the sidelines of the 35th ordinary session of the Assembly of the pan-African organization. The minister mentioned in this regard the reports of the African Commission on Human Rights, the AU Peace and Security Council and on the humanitarian situation. The report on the humanitarian situation in Africa, which has always been exploited to address only one point of view on the subject, has now become a report with a lot of balance and very objective. So many achievements that reinforce Morocco’s vision for the African Union with regard to the issue of the Moroccan Sahara, that is to say that the subject falls within the exclusive jurisdiction of the United Nations, reaffirmed Mr. Bourita. “Whoever wanted to push the African Union on this issue had a special agenda and wanted to achieve in Addis Ababa what they could not do in New York,” the minister noted. “Today, a harmony will be created between New York and Addis Ababa. The same perspective, the same logic. The reference is the Security Council resolutions. The reference is the UN way. The African Union, like any other regional organization, supports and accompanies the efforts of the United Nations,” the minister pointed out. Bourita represents HM King Mohammed VI at the 35th session of the AU Assembly held under the theme ““Building Resilience in Nutrition and Food Security on the African Continent: Strengthen Agriculture, Accelerate the Human Capital, Social and Economic Development.”