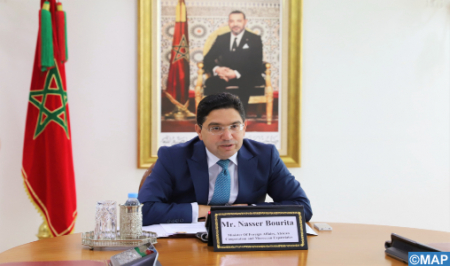 Morocco is determined to achieve a solution to the artificial conflict over the Moroccan Sahara within the framework of the autonomy initiative and “nothing else but the autonomy initiative under Moroccan sovereignty”, underlined the Minister of Foreign Affairs, African Cooperation and Moroccans Abroad, Nasser Bourita, who noted that the framework for settlement would be “round tables with the participation of the real party to this regional dispute”, i.e. Algeria. “For Morocco, there is a desire to achieve a solution within the framework of the Moroccan autonomy initiative and nothing else but the Moroccan autonomy initiative. The framework is that of round tables with the participation of the real party to this regional dispute”, the minister said in an interview with French TV Channel France24 and radio RFI, on the sidelines of his participation in Addis Ababa in the 35th Ordinary Session of the African Union Assembly. “Morocco, which is in its territory and is in its self-defense, has never sought confrontation. Morocco is for a solution within the framework of the United Nations, within the framework of autonomy under Moroccan sovereignty”, reiterated Bourita, stressing the Kingdom’s adherence to UN resolutions. “They are the ones who rejected the resolutions of the Security Council, it is not Morocco. And it is not Morocco that issued a statement in October to say I reject the resolution adopted by the Security Council. It is this country (Editor’s note: Algeria), which has officially rejected the will of the international community”, he recalled. The minister affirmed that “we must not put Algeria and Morocco on an equal footing”. “Morocco is aligned with the Security Council resolution, while Algeria does not want this resolution,” he said. “The UN Secretary-General’s personal envoy for the Sahara has a mandate, has a framework for action, he himself says that he works for the round tables. If Algeria doesn’t want to, that’s its problem”. Regarding the relationship with Algeria and the decision of this country to unilaterally sever diplomatic relations with Morocco, Bourita said that “the advantage of this Algerian escalation, when one is a party in this problem, it is that Algeria, today, has demonstrated that it is the real party in this problem”. “Algeria has taken unilateral positions, it is its right. His Majesty the King’s approach has been not to escalate, not to even react to these unilateral decisions and that will always be our position,” stressed the minister, for whom “Algeria is in excess and what is excessive is insignificant, but the positions of Morocco are clear”. On the possibility of a military confrontation with Algeria, the minister replied that “Morocco is not in the escalation. Morocco is not insulting the future. And Morocco thinks that we never change the geography”, reiterating the royal approach which is “not to go into escalation and to focus on what unites us, not on what disunits us”. In this interview with France24 and RFI, the Libyan issue was also discussed. On this subject, Mr. Bourita reiterated Morocco’s position for a realistic and pragmatic solution. According to Mr. Bourita, “there is a Eurocentric perception that makes elections, (which were scheduled for December 24, but which did not take place), the panacea to solve everything. The Libyan context is a particular context. The objective is to settle the issue of legitimacy but without losing the stability of Libya. This is why we need this balance: how to move forward towards this election but without creating chaos and Morocco’s approach has always been a realistic and pragmatic approach which first empowers the Libyan actors”. According to the minister, “we can organize all the international conferences in Europe and elsewhere and come out with recipes. But are these recipes adapted to the Libyan context, that is the real problem”, affirming that “Morocco is against creating a vacuum in Libya by denigrating institutions”. “These institutions, whether we like them or not, but at least today they allow the Libyan State to continue to function, to work for the preparation of the elections by working on these nodes which were identified through the process which was not concluded on December 24,” the minister said. “Today, the elections remain an objective in Libya, and Morocco believes in them, but they are not an end in themselves, because the most important thing is that this country regains its stability, regains its role because for Morocco, as HM the King said, Libya is not a geographically neighboring country, but it is very close: “its stability affects us but its instability also affects us and the links between the two countries are very important and very old”. In this interview, the minister underlined Morocco’s position regarding Israel’s status as an observer member of the African Union, saying that Morocco is “favorable to the implementation of the texts of this organization”. He also reaffirmed Morocco’s commitment alongside the Palestinian people. Bourita pointed out that the African Union has changed and that “it is no longer the preserve of a country or two who can say no, we will block and that the organization will follow them”. “Africa has changed and the African Union has changed and the debates have shown it”, said the minister, who insisted on reaffirming Morocco’s commitment alongside the Palestinian people and its position in favor of a two-State solution. “All of us are for a two-State solution. And when we are for a two-State solution, it is because we must recognize two states that must live side by side in peace and tranquility. This is Morocco’s position and the re-establishment of relations with Israel will in no way change Morocco’s position on the Palestinian issue,” said the minister, adding that Morocco is clear in its positions and that it does not exploit the causes of others. “Morocco wishes that the evolution of its relationship with Israel can allow the realization of the rights of the Palestinian people to have an independent State”, said Mr. Bourita.