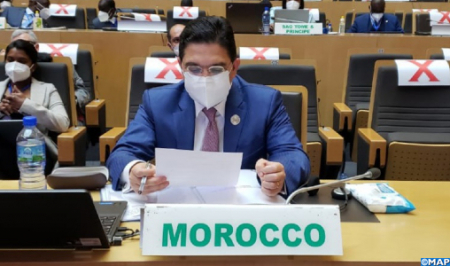 Migration should not be dealt with as an emergency but should be rather approached with a sense of responsibility and solidarity, and a ‘security first’ approach should be abandoned, stresses the Report of HM King Mohammed VI, Leader on the issue of Migration, on the follow-up to the operationalization of the African Migration Observatory in Morocco, presented Sunday before the 35th Ordinary Session of the African Union Assembly, held in Addis Ababa. “The pandemic will eventually end – very soon, hopefully – but migration is here to stay”, says the report, presented by the Minister of Foreign Affairs, African Cooperation and Moroccans Abroad, Nasser Bourita. On all continents -and particularly in Africa- the pandemic has had a major impact on migration: Border closures and restrictive measures to contain the spread of the pandemic have had “an impact on migrant mobility”. Restrictions on cross-border movement have contributed to migrants’ vulnerability and exposure to human trafficking, putting migrants at greater risk of exploitation by criminals, smugglers and traffickers. “Border restrictions have not stopped crossings but have affected migration routes, leading to the emergence of even more dangerous ones”, the report underlines. The economic and social effects of migration have increased the precariousness of migrant workers, particularly women and young people. They have been “disproportionately affected” by socio economic inequalities such as unemployment, the drop in income in the informal sector and lack of social coverage. In addition to the consequences of the pandemic, there have also been impacts relating to conflicts and climate change, such as those of droughts, cyclones and floods that have hit the African continent, the report adds. The global health crisis has also slowed down the efforts and the progress made by African States towards the achievement of the 2030 Sustainable Development Goals and the African Union Agenda 2063, according to the same source. The pandemic has demonstrated, once again, the positive impact of migrants on the host country and that of the diasporas on the country of origin. “In addition to being essential workers in their host countries, migrants have harnessed their potential and have contributed to finding creative, innovative solutions to the pandemic”. The importance of the diaspora is such that it is rightly referred to as the “sixth region of Africa”. The diaspora has been playing an increasingly important role in fostering socio-economic development, particularly through remittances. It actively contributes to the achievement of the Sustainable Development Goals (SDGs), skills development initiatives and the transfer of technology, the document points out. Despite the impact of the pandemic, migrants have continued to contribute to the development of their home continent. Contrary to predictions that remittances would decline by 20% because of the pandemic, remittances to Africa reached $78.4 billion in October 2020, accounting for 11.7% of total remittances in the world. Despite a slight decline compared to 2019, remittances have proved to be a “more resilient and reliable source than foreign direct investment flows”, according to the report. However, Africa has the sad record of having the highest cost for sending remittances in the world. They average 8.5% of the total amount sent, which is nearly three times the Sustainable Development Goal target of 3%. The report notes that, according to some studies, the deductions made by international money transfer organizations can be as high as 15%, representing a shortfall of approximately 1.6 billion euros in annual earnings for the African continent. Moreover, only 10% of these remittances are invested in projects or savings products in Africa. The pandemic has underscored the great importance of the Marrakech Compact and confirmed the relevance of its objectives. In particular, the crisis has reminded us of the risks of irregular migration, the importance of regularizing migrants’ status and the need to guarantee migrants’ access to social security. The pandemic has not prevented fake news about migration in Africa from continuing to circulate. However, stereotypes do not stand up to scrutiny: Thus, the destination of African migrants is mostly Africa. It even increased by 13% between 2015 and 2019, it says. “African migration accounts for only 14% of the total international migrant population, far less than migrants coming from other continents”, the report highlights, noting that most migrants move within the African continent and within their home region, especially in West Africa. The creation of the African Continental Free Trade Area with its corollary of free movement of people should reinforce this trend. The report stresses that the humanitarian crisis caused by the thousands of deaths on migration routes is still continuing. “While the central Mediterranean remains the deadliest route in the world, more than 11,094 missing persons have been recorded in Africa in recent years. Whether it is migration or the pandemic, Africa is paying a heavy price”.