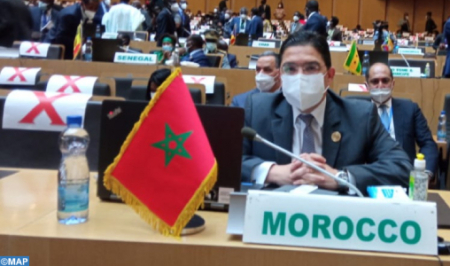 Security developments in Africa should lead to deep reflection and concerted and effective action, said the Minister of Foreign Affairs, African Cooperation and Moroccans Abroad, Nasser Bourita, before the 35th Ordinary Session of the African Union Assembly. Speaking at the Summit, the Minister conveyed the warm congratulations of His Majesty King Mohammed VI to the new Chairperson of the African Union and the Sovereign’s full support for his mandate at the head of the Pan-African organization. The Minister of Foreign Affairs, African Cooperation and Moroccans Abroad also congratulated the Chairperson of the AU Commission for the work and commitment during his mandate and thanked the Commissioner in charge of peace and security for his exhaustive and interesting report on the situation of peace and security in the continent. Commenting the report on the activities of the Peace and Security Council (PSC) and the situation of peace and security in Africa, Mr. Bourita noted that the security landscape in Africa unfortunately presents deplorable setbacks and worrying developments. “Indeed, on the one hand, there is internal political instability in several African countries and the return of the scourge of coups d’état in several regions of the continent. There is also an alarming spread of terrorism in our continent and the growing link between separatist groups and terrorism. Finally, we can see the growing negative impact of climate change on the fragility of the security context of our continent”, said the minister, adding that “these developments should challenge us and lead to deep reflection and concerted and effective actions.” Regarding the effective implementation of AU decisions and the achievement of the AU Agenda 2063, which are closely linked to the objectives of good governance, rule of law and security in Africa, Mr. Bourita underlined that this it is with this in mind that the reform component of the PSC must continue in order to improve its working methods and make this body stronger and better equipped to respond to the challenges related to peace and security in the continent. On the issue of the Moroccan Sahara, the minister reaffirmed that the Kingdom of Morocco is continuing its commitment within the framework of the process led by the United Nations to achieve a solution to this regional dispute. The United Nations Security Council adopted resolution 2602 last October, which calls for the holding of round tables with the participation of all parties. “Unfortunately this resolution, which represents the will of the international community, was rejected by the real party to this regional dispute. Resolution 693 established the framework for our organization’s intervention in support of the UN-led process. Morocco will continue to support this framework,” the minister reiterated. With regard to the importance of the political governance and constitutionalism in Africa as a sinequanone condition for the stability of the continent, the minister stressed in this regard that Morocco welcomes the efforts of the AU Commission in the observation of elections in the continent. “Morocco is aware of the difficulties in terms of human and financial resources encountered by the Commission in the conduct of election observation missions. To this end, Morocco announces that it will make a financial contribution to strengthen the action of the Commission in the area of election observation. Morocco will also make its long experience and expertise available to the Commission, particularly in terms of training observers,” the minister concluded. Bourita represents HM King Mohammed VI at the 35th session of the AU Assembly held under the theme ““Building Resilience in Nutrition and Food Security on the African Continent: Strengthen Agriculture, Accelerate the Human Capital, Social and Economic Development.”