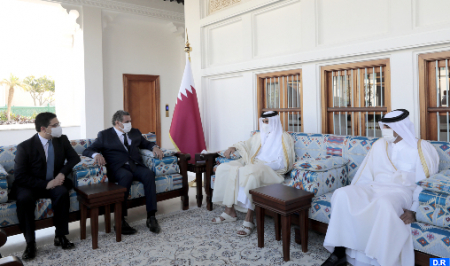 The State of Qatar on Monday reiterated its full support for the territorial integrity of the Kingdom of Morocco and the autonomy Initiative as the basis for the settlement of the artificial conflict over the Moroccan Sahara. Any solution to this issue can only be achieved within the framework of Morocco’s sovereignty and the integrity of its territories, insisted Doha on the occasion of the 8th session of the Moroccan-Qatari High Joint Commission, chaired by chaired by the Qatari Prime Minister and Minister of Interior Sheikh Khalid bin Khalifa bin Abdulaziz Al-Thani, and the head of government, Aziz Akhannouch. At the opening of this meeting, the two sides expressed their satisfaction with the distinguished level reached by bilateral relations in various fields, affirming their determination to give new impetus to their cooperation to serve the interests of the two brotherly peoples. The two parties discussed the various areas of bilateral cooperation, stressing the importance of coordination and political consultation, as well as joint action, said the minutes of the session, adding that they reviewed the results of the Preparatory Committee and Ministerial meetings and agreed on a set of issues. In terms of sectoral cooperation, the Commission called for the implementation of the cooperation agreement in the field of maritime transport, signed in April 2016, through the formation of a joint working group, which will establish a work plan for the execution of the axes of the said agreement. With regard to air transport, the Commission called for the development of a partnership bringing together the Mohammed VI International Academy of Civil Aviation and the Qatar Aeronautical Academy, through the activation of the areas of cooperation mentioned in the memorandum of agreement. This session was marked by the signing of six agreements and memoranda of understanding in various sectors, including endowments and Islamic Affairs, Tourism and financial control.