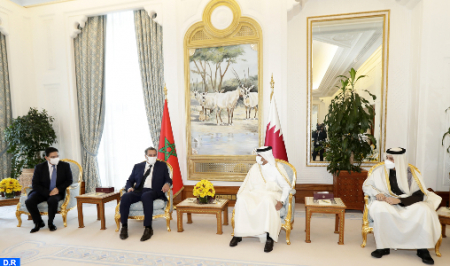 Morocco and Qatar signed, Monday in Doha, six agreements and memoranda of understanding in various sectors on the occasion of the holding in the Qatari capital of the 8th session of the High Joint Commission. These agreements, signed during a meeting chaired by the Qatari Prime Minister and Minister of Interior Sheikh Khalid bin Khalifa bin Abdulaziz Al-Thani, and the head of government, Aziz Akhannouch, concern memoranda of understanding on cooperation in the fields of endowments and Islamic Affairs, Tourism and Trade Activities between the State of Qatar and the Kingdom of Morocco, as well as financial control between the Audit Bureau of the State of Qatar and the Moroccan Court of Audit. The agreements signed also concern the 5th executive program of the agreement of cultural and artistic cooperation (2022-2025), the 3rd executive program in the field of youth (2023-2024), as well as the 2nd executive program of cooperation in the field of sports (2022-2023). During this session, postponed due to health conditions imposed by Covid-19, the delegations of both countries discussed the ways to develop relations between the State of Qatar and the Kingdom of Morocco, reflecting the willingness of the leaders of the two countries, His Majesty King Mohammed VI and His Highness Sheikh Tamim Bin Hamad Al-Thani, Emir of the State of Qatar, to achieve the aspirations of the two brotherly peoples. The Moroccan delegation, which took part in this meeting, includes the Minister of Foreign Affairs, African Cooperation and Moroccans Abroad, Nasser Bourita, the Minister of Tourism, Handicrafts and Social and Solidarity Economy, Fatima-Zahra Ammor, the Minister of Youth, Culture and Communication, Mohamed Mehdi Bensaid, the Minister of Economy and Finance, Nadia Fettah Alaoui, the Minister of Industry and Trade, Ryad Mezzour, the Minister of Energy Transition and Sustainable Development, Leila Benali, in addition to the Moroccan ambassador to Qatar, Mohamed Setri. As for the Qatari delegation, it is composed of the Minister of Endowments and Islamic Affairs, Ghanem Bin Hein Al-Ghanem, the Minister of Culture, Abdul Rahman Bin Hamad Al Thani, the Minister of Sports and Youth, Salah bin Ghanem Al Ali, the Chairman of the Qatar Tourism Authority, and Abdulaziz bin Mohammed bin Ahmed Al Emadi, President of the State Audit Bureau.