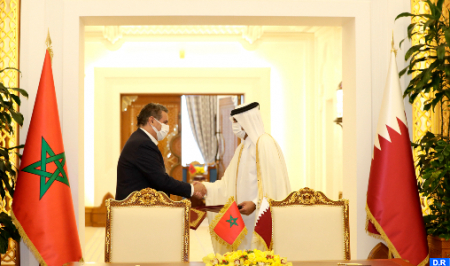 The Emir of Qatar, HH Sheikh Tamim bin Hamad Al-Thani, on Monday received in Doha the Head of Government, Aziz Akhannouch, and the delegation accompanying him, on the occasion of the 8th session of the Morocco-Qatar High Joint Cooperation Commission. During this meeting, Akhannouch conveyed the greetings of HM King Mohammed VI to HH the Emir of Qatar, wishing HH good health and happiness, and the Qatari people continued progress and prosperity, the Qatar News Agency (QNA) reported.  For his part, HH the Emir entrusted Akhannouch to convey his greetings to HM King Mohammed VI, wishing him good health and wellness, and the Moroccan people further progress and development. During the meeting, they reviewed the bilateral relations between the two brotherly countries and means of developing and strengthening them, in addition to the latest developments on the regional and international arenas. The meeting was attended by Prime Minister and Minister of Interior Sheikh Khalid bin Khalifa bin Abdulaziz Al-Thani, Deputy Prime Minister and Minister of Foreign Affairs Sheikh Mohammed bin Abdulrahman Al-Thani and Chief of Amiri Diwan Sheikh Saoud bin Abdulrahman Al-Thani. On the Moroccan side, it was attended by the Minister of Foreign Affairs, African Cooperation and Moroccan Abroad, Nasser Bourita, and Morocco’s ambassador to Qatar, Mohamed Setri. The eight session of the Moroccan-Qatari high joint commission of cooperation opened Monday in Doha, under the chairmanship of Qatari Prime minister and Interior minister, Sheikh Khalid bin Khalifa bin Abdulaziz Al-Thani, and the head of government, Aziz Akhannouch. During this session, the delegations of both countries discussed the ways to develop relations between the State of Qatar and the Kingdom of Morocco. The meeting was marked by the signing of several agreements of cooperation in various areas.