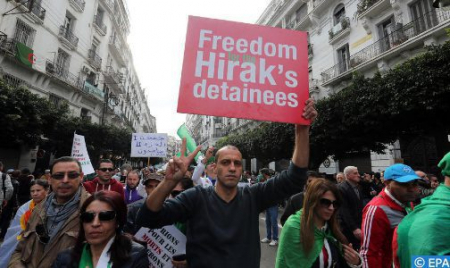 Human rights activists are concerned over the “increased repression” of the peaceful Hirak movement in Algeria, thus reviving the debate on the instrumentalization of anti-terror laws in this country to curb freedom of expression and opinion, underlined the Italian newspaper “La Stampa”. Quoting several lawyers from the Algerian Collective for the Defense of Prisoners of Conscience, the Italian daily stresses that at least forty prisoners of conscience in El-Harrach prison, in Algiers, started a hunger strike on January 28. These imprisoned Hirak activists, most of whom have been waiting for their trial for several months, denounce their pre-trial detention and their prosecution which can go as far as “terrorism” on the basis of article 87 bis of the penal code, amended in June 2021, explains the publication, noting that the prosecutor’s office challenged this hunger strike and threatened with possible legal action those relaying this information. “Algiers instrumentalizes the fight against terrorism, by making it a weapon to repress any opinion criticizing the power”, says the newspaper, noting that “without freedom of expression, this country will neither be able to change nor to progress”. These authoritarian practices of the Algerian system have been strongly denounced by the UN, reports the author of the article, recalling that in a communication officially published on December 27, 2021, several United Nations bodies reporting to the Human Rights Council had challenged the authorities about hundreds of activists, journalists and human rights defenders who have been wrongfully prosecuted on terrorism-related charges.