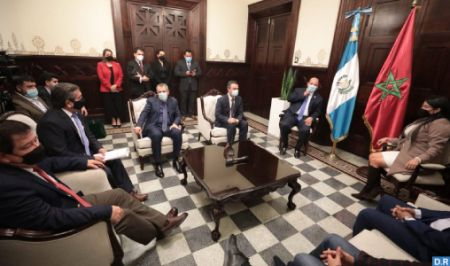 Morocco’s House of Advisors (upper house) speaker, Naama Mayara, held a meeting on Monday with Shirley Joanna Rivera, Guatemala’s Congress President, focusing on strengthening parliamentary cooperation between the two countries. During this meeting, Mayara welcomed the quality of relations between the Kingdom and Guatemala, and the spirit of consultation, cooperation and coordination between the two countries on various issues of common interest. On this occasion, Mayara highlighted the Moroccan Sahara issue’s recent developments and significant stages, including the growing momentum of Morocco’s sovereignty recognition over its southern provinces, as illustrated by the opening of more than 24 consulates in the cities of Laayoune and Dakhla. In this regard, Mayara expressed “his personal gratitude and recognition of all components of the Moroccan Parliament for the noble and fraternal positions of the Republic of Guatemala, government and parliament, on the issue of the territorial integrity of the Kingdom.” Regarding parliamentary cooperation, he congratulated Joanna Rivera for her election to the Executive Board of the Latin American and Caribbean Parliament (Parlatino) during the recent General Assembly of this organization. Mayara stressed, in this sense, the priority given by Moroccos’s House of Advisors to strengthening relations of partnership and friendship with national and regional parliaments, in accordance with the strategic choice of the Kingdom in favor of the consolidation of South-South cooperation, under the enlightened leadership of HM King Mohammed VI. For her part, Joanna Rivera said that the positions of the legislative institution of the Republic of Guatemala on the issue of the Moroccan Sahara are consistent with the position of the Guatemalan people and government, stressing that these consistent stances embody the strength of the historical relationship between the two countries. The President of the Guatemalan Congress also welcomed the distinguished presence of Morocco during the work of the General Assembly of Parlatino, welcoming in particular the opening of the “King Mohammed VI Library” at the headquarters of the largest and most important parliamentary assembly in the region. She also highlighted the importance and status enjoyed by Morocco among the countries of Central and Latin America in general, and Guatemala in particular, in addition to its geostrategic positioning that makes it a real crossroads of cooperation between Guatemala, Africa and the Arab world. Joanna Rivera stressed the importance of strengthening cooperation between the legislative institutions of the two countries, through the establishment of friendship groups that are able to constitute mechanisms allowing both institutions to consolidate the partnership and benefit from the pioneering experiences of the Kingdom in many areas, including migration management, climate change and agricultural and water policy. Mayara was accompanied, during this meeting, by the advisor of the Istiqlal Group for Unity and Egalitarianism, Ahmed El Kharif, the Kingdom’s Ambassador to Guatemala, Tarik Louajri, as well as the head of the cabinet of the Speaker of the House of Advisors, Zakaria El Hanini.