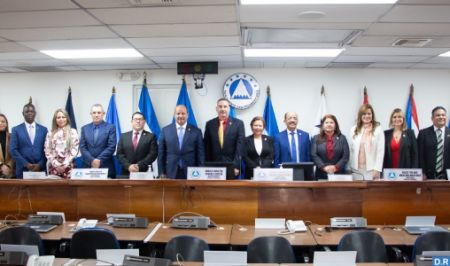 The Central American Parliament (Parlacen) has granted Morocco the status of ‘advanced partner’ in recognition of its leading role in strengthening South-South cooperation. This announcement was made on Monday in Guatemala City by Parlacen’s President Daniel Ortega Reyes on the occasion of a meeting of the executive board of this regional legislative institution with a Moroccan delegation led by the Speaker of the House of Advisors (upper house), Naama Mayara. Reyes welcomed, in this context, Morocco’s “great support”, until now as an observer member, to the activities of this regional grouping, stressing that all components of the Central American Parliament are “fully aware” of the stature enjoyed by the Kingdom in its regional environment. He called, on this occasion, for the holding of a parliamentary forum on migration between the two legislative institutions in order to benefit from the Moroccan experience in managing issues related to migration and migrants. The president of Parlacen stressed that Morocco’s migration policy, in line with the High Instructions of HM King Mohammed VI, is a model especially since it is based on the principles and UN norms relating to the respect of human rights. Speaking at the meeting, Mayara stressed the strategic importance that Morocco attaches to South-South cooperation, highlighting the promising prospects of these relations, after the historic visit of HM King Mohammed VI in several countries in the region. The speaker of the Moroccan parliament’s upper house has also reviewed the multiple and growing challenges inherent in the geopolitical changes arising from the unprecedented health crisis caused by the COVID-19 pandemic. In this sense, he mentioned the equitable access to vaccines as a prerequisite for recovery and economic upswing, calling for the use of the Africa-Latin America Parliamentary Forum to advocate for the causes of both continents in different international fora. Mayara expressed the willingness of the House of Advisors, which hosts the Forum’s secretariat, to work for the success of the Summit of Presidents of Regional Parliamentary Unions in Africa and Latin America, adding that the Central American Parliament is an essential partner in this process. On the same occasion, he expressed his “deep” appreciation and esteem to the components of Parlacen for their fraternal and noble positions towards the Moroccan just causes, especially Morocco’s territorial integrity and its right to ensure peace, security and free civil and commercial movement on all its borders. For his part, Advisor Ahmed Lakhrif welcomed the achievements made in the framework of cooperation relations between the two institutions, saying he was determined, as a representative of Morocco’s upper house to the Parlacen, to continue to work for the establishment of a working agenda and a roadmap to raise the level of these relations. He highlighted, in this regard, the importance of the upper house speaker’s support to these ties as evidenced by his recent visit to the region of Central America and Latin America. This meeting took place in the presence of Tarik Louajri, Moroccan Ambassador to Guatemala, and Zakaria El Hanini, Chief of Staff of the Speaker of the House of Advisors. Created in 1991, the Central American Parliament, which sits in Guatemala, is a regional forum that works for integration between countries in the region. The body has six member states, namely El Salvador, Guatemala, Honduras, Nicaragua, Panama and the Dominican Republic, as well as numerous observer countries.