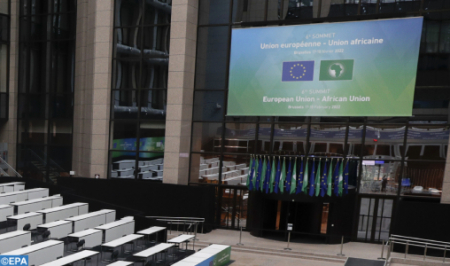 The Moroccan members of the Morocco-EU Joint Parliamentary Committee, representing all political tendencies of the Kingdom’s Parliament, said, on Wednesday, they were appalled by the European intention to allow the participation of the polisario leader, the so-called Brahim Ghali, in the 6th European Union (EU)-African Union (AU) summit, scheduled for February 17 and 18 in Brussels. In a letter addressed to MEPs, the chairman of the Morocco-EU Joint Parliamentary Committee, Lahcen Haddad, called on his European colleagues to “denounce these maneuvers that tend to harm the positive dynamics that characterize relations between the Kingdom and the EU.” “We count on your understanding and that of all our European colleagues to prevent the entry of the leader of this separatist movement and denounce these maneuvers that tend to harm the positive dynamic that characterizes Morocco-EU relations and the common destiny that unites the two shores of the Mediterranean,” he added. Haddad also called not to allow to instrumentalize Europe in support of the agenda of a military junta at the expense of a comprehensive Morocco-EU partnership. This partnership, according to Haddad, respects the sovereignty of both parties. It also respects international legal instruments that bind Morocco not only to Europe but also to the entire international community, in accordance with international conventions on the subject and to which Morocco fully adheres. He assured, in this regard, that Morocco and the EU “have an inestimable potential that could transform the entire region into a zone of prosperity,” adding that “visions that often feed on unresolved misunderstandings become corroded with time.” In this letter, Haddad also said that if the EU-AU summit is an opportunity to lay the foundations for a renewed and deepened partnership between the two parties, based on trust and a clear understanding of mutual interests, to strengthen prosperity and address security and economic issues, it is the place of the Continent in the architecture of global governance that is also questioned. “We wish to share with you our concerns about the turbulence that may affect the strategic nature of the Africa-Europe partnership born of a common will to build a space for dialogue and cooperation for security, development and shared prosperity,” he continued. This is because “we are convinced of the centrality of the political-moral code governing the mandate that has been democratically entrusted to them by the voters, and anxious to perpetuate the tradition of dialogue and consultation that distinguishes their noble mission as parliamentarians.” Recalling the fraudulent entry last April on Spanish soil of the so-called Brahim Ghali under a false identity and under dubious humanitarian claims, he stressed that this incident had “strained the strategic partnership with our northern neighbors.” “This manifest bias had aroused the astonishment of Moroccan public opinion and was unanimously condemned by the authorities of the Kingdom, given that it is an individual who has become infamous for accumulating various crimes and offenses for which he should be brought before the Spanish and international courts,” he said in the letter. Haddad said that the so-called Brahim Ghali is prosecuted for illegal detention, abduction, rape, torture, crimes against humanity and acts of torture committed in the Sahrawi refugee camps in Algeria’s Tindouf, for years and has been behind all the scandals of misappropriation of humanitarian aid. He further said that the extent of corruption and its rooting in the ranks of the “polisario” has been pinned by the European Anti-Fraud Office ‘OLAF’ since 2015 to the present. “A possible entry of this individual on European soil while the justice system prosecutes him for several charges against him, the institutional credibility of the entire European Union is at stake,” warned the chairman of the Morocco-EU Joint Parliamentary Committee.