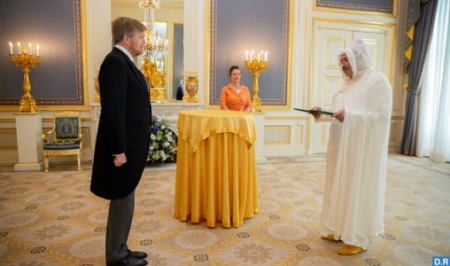 Morocco’s Ambassador to the Kingdom of the Netherlands, Mohamed Basri, on Wednesday presented his credentials to King Willem-Alexander. During a ceremony held at The Hague’s Noorderinde Royal Palace, King Willem-Alexander instructed the Ambassador to convey his warm greetings to HM King Mohammed VI, the Royal Family and the Moroccan people. He also expressed his willingness to strengthen friendship bonds and to boost cooperation relations between the two Kingdoms, stressing the important role played by the Moroccan community in the Netherlands in bringing the two countries closer. According to a statement released by the Moroccan embassy, Basri conveyed HM King Mohammed VI’s warm greetings to King Willem-Alexander and expressed the Sovereign’s interest in strengthening the relations of friendship and cooperation between Morocco and the Netherlands. The Moroccan ambassador also reaffirmed the Kingdom’s firm will to consolidate and diversify partnership between the two countries, as well as to strengthen friendship bonds between the two peoples.