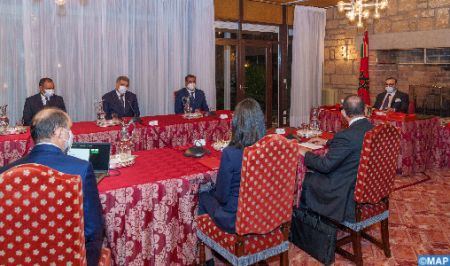 Here follows a statement by the Royal Office: “His Majesty King Mohammed VI, may God assist him, chaired, on February 16, 2022 at the Royal Residence of Bouznika, a working session devoted to the new investment charter. This working session comes in the wake of the High Royal Directions contained in the opening speech of the Parliament, calling for the adoption, as soon as possible, of a new competitive investment charter. During this session, a presentation of the main lines of the project of the new investment charter was presented to the Sovereign by the Minister Delegate to the Head of Government in charge of investment, convergence and evaluation of public policies. The project, which is in line with the spirit and ambition of the New Development Model, aims to reverse the current trend where private investment represents only about one third of total investment, with public investment representing two thirds. It thus intends to increase the share of private investment to two-thirds of total investment by 2035. The major objectives assigned to the new investment charter are the creation of employment, the promotion of an equitable development of the territories and the prioritization of the carrier sectors for the national economy. To this end, the draft of the new charter includes a main support system consisting of: – common premiums, in support of investments in line with the High Royal Orientations, the objectives of the New Development Model and the priorities set by the government; – an additional territorial bonus to encourage investment in the least favoured provinces; – an additional sectoral bonus, granting incentives to boost growth sectors.   The project also provides for exclusive support measures for projects of a strategic nature such as the defense or pharmaceutical industries, within the framework of the National Investment Commission, as well as a specific support mechanism for very small, small and medium-sized enterprises, in addition to a mechanism for the development of Moroccan investments abroad. His Majesty the King, may God assist him, encouraged the government for the work done, and gave His High Instructions for the preparation of the implementation details of the new investment charter. The Sovereign also emphasized the role that the national private sector should play in this project, inviting the government to actively involve private operators, including the CGEM and the GPBM, in the implementation process of the charter. His Majesty the King also recalled that the renovation of the legal and incentive schemes remains dependent on their proper implementation and regular monitoring of their implementation on the ground, in order to give a new impetus to private investment and to enshrine the Kingdom as a privileged land of investment at the regional and international level. The working session was attended by the Head of Government, Mr. Aziz Akhannouch, the Advisor to His Majesty the King, Mr. Fouad Ali El Himma, the Minister of Interior, Mr. Abdelouafi Laftit, the Minister of Economy and Finance, Ms. Nadia Fettah Alaoui, the Minister of Industry and Trade, Mr. Ryad Mezzour and the Minister Delegate to the Head of Government in charge of Investment, Convergence and Evaluation of Public Policies, Mr. Mohcine Jazouli”.