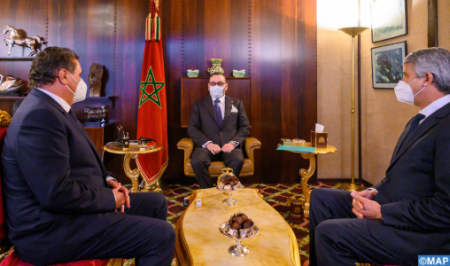 Here follows a statement by the Royal Office: “HM King Mohammed VI, may God assist him, received on Wednesday at the royal residence in Bouznika, the head of government, Mr. Aziz Akhannouch and the Minister of Agriculture, Fisheries, Rural Development and Water and Forests, Mr. Mohamed Sadiki. This audience is part of the High Royal solicitude of HM the King for the rural population and all components of the agricultural sector, especially at a time when the agricultural season is experiencing a large deficit of rainfall. The national average rainfall has so far reached 75 mm, recording a deficit of 64% compared to a normal season. This climatic and hydric situation negatively impacts the progress of the agricultural campaign, especially the fall crops and the availability of pasture. On this occasion, the Sovereign stressed the need for the government to take all necessary emergency measures to cope with the impact of the deficit of rainfall on the agricultural sector, in the hope that God will shower his mercy on our country and fill it with beneficial rains. Pursuant to the proactive Royal High Directions in this regard, the exceptional program elaborated by the government aims at mitigating the effects of the delayed rainfall, alleviating the impact on the agricultural activity and providing assistance to the affected farmers and herders. His Majesty the King has given His high instructions for the Hassan II Fund for Economic and Social Development to contribute an amount of 3 billion dirhams to this program, which will require a budget estimated at 10 billion dirhams. This program focuses on three main aspects: – The first deals with the protection of animal and plant capital and the management of water scarcity; – The second aspect concerns agricultural insurance; – The third relates to the reduction of financial burdens on farmers and professionals, the financing of operations to supply the national market in wheat and fodder, in addition to the funding of innovative investments in the field of irrigation”.