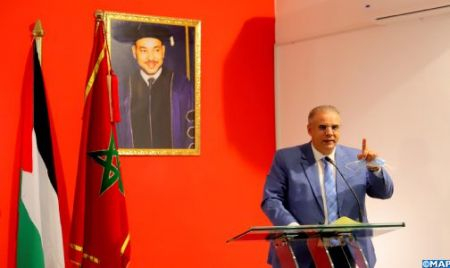 Prominent Palestinian figures have praised, during a meeting held Thursday in Laayoune, the commitment of HM King Mohammed VI to the defense of the Palestinian cause, in general, and the preservation of the city of Al-Quds in particular. “We welcome the role of Morocco and HM King Mohammed VI, Chairman of the Al-Quds Committee, in supporting the Palestinian cause and the resistance of the Al-Quds inhabitants,” said the Advisor to the Office of the Palestinian Presidency, responsible for Al-Quds Affairs, Ahmed Al-Rouidi. In a video conference, Al-Rouidi noted that the inhabitants of the holy city “highly appreciate the valuable initiatives” undertaken by the Bayt Mal Al-Quds Asharif Agency, Al-Quds Committee’s executive arm, to support their resistance through the funding and implementation of socio-economic and cultural projects aimed at safeguarding the Arab-Islamic character of the holy city. This important contribution, which is “far from any political agenda”, has helped the people of Al-Quds face the Israeli plans to Judaize the holy city and change its history and monuments, added the Palestinian official at this meeting held at the Higher School of Technology (EST) in Laayoune. Al-Rouidi also welcomed the participatory and proximity approach adopted by the Agency in carrying out its projects in Al-Quds, calling on other Arab and Islamic countries to contribute more to strengthen the commendable actions of Bayt Mal Al-Quds Asharif Agency. For his part, the President of Al-Azhar University in Gaza, Omar Milad, highlighted Morocco’s support, under the enlightened leadership of HM King Mohammed VI, to the legitimate rights of the Palestinian people. In this regard, he added that the interest of the Kingdom in the protection of Al-Quds is not new, but dates back to decades as evidenced by the existence of the Morocco Gate neighborhood in Al-Quds, which confirms the depth of secular relations linking the two peoples and brotherly leaders. Milad expressed his thanks and gratitude to the Sovereign for His initiative to finance the reconstruction of the Hassan II Faculty of Agricultural and Environmental Sciences, part of Al-Azhar University in Gaza, inaugurated in 2015. This Faculty, which was established in 1992 in Beit Hanoun and subsequently rebuilt thanks to a donation of 7.8 million US dollars, granted by HM the King, is further proof of the constant efforts of HM the King and the Bayt Mal Al-Quds Agency in supporting higher education institutions in Palestine, he noted. Milad also recalled the signing, last October, of a framework agreement between the Hassan II Agronomic and Veterinary Institute (IAV) and Al-Azhar University in Gaza on the expansion of the areas of education and training accredited to the Hasan II Faculty of Agricultural and Environmental Sciences, with a view to establishing a special section for veterinary medicine.