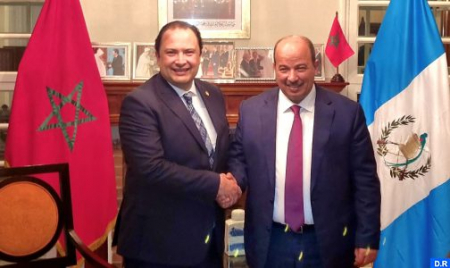 The Minister of Foreign Affairs of Guatemala, Mario Bucaro, praised Morocco’s pioneering role in strengthening South-South cooperation and promoting peace and security. “The geographical position and stature of Morocco in its regional environment allow the Kingdom to play a pioneering role in strengthening South-South cooperation and promoting peace and security,” said Bucaro during a meeting in Guatemala City with the Speaker of the House of Advisors (upper house), Naama Mayara, noting that this role has been reinforced through the resumption of Moroccan-Israeli relations. In this regard, the Minister welcomed the strong ties between Morocco and Guatemala, stressing the shared desire, at the highest level, to commemorate the 50th anniversary of the diplomatic relations between the two countries, through a series of diplomatic and cultural activities, reflecting the importance of this step in the Morocco-Guatemala diplomatic history. The head of Guatemalan diplomacy reiterated, to this effect, the firm position of his country vis-à-vis the territorial integrity of the Kingdom, which enjoys the unanimous support of the people of Guatemala. “Whenever it is necessary to support Morocco, Guatemala is there, because the Kingdom has always supported Guatemala,” he stressed. Bucaro also took the opportunity to express his gratitude to Moroccan initiatives of solidarity and humanitarian action in favor of the Guatemalan people after the damage caused by natural disasters in the region. For his part, Mayara welcomed the excellent dynamics of bilateral relations, based on consultation, dialogue, solidarity and mutual respect, expressing the feelings of esteem and gratitude of the Moroccan people to the friendly countries whose positions of support are constant towards the territorial integrity of the Kingdom. At the economic level, Mayara called for taking advantage of the potential of both countries to promote trade, stressing in this context the strategic importance of the launch of the Dakhla port which will connect Latin American countries to Morocco’s African depth. This meeting took place in the presence of Morocco’s ambassador to Guatemala, Tarik Louajri, as well as the advisor of the Istiqlali group for Unity and Egalitarianism, Ahmed El Kharif, and the head of the cabinet of the Speaker of the House of Advisors, Zakaria El Hanini.