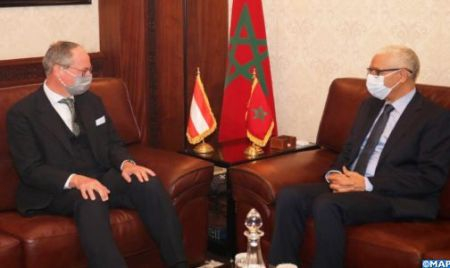 Morocco and Austria are facing common challenges related to strengthening security, peace and stability in Europe, Africa and the Mediterranean basin, said Wednesday in Rabat, speaker of the House of Representatives, Rachid Talbi Alami. During a meeting with the ambassador of the Republic of Austria to Morocco, Klaus Kögeler, Talbi Alami added that these challenges also include climate change, migration and other issues of vital importance “which require more coordination, cooperation and mutual support,” said a statement by the lower house. During this meeting, both parties welcomed the distinguished friendship relations between the Kingdom of Morocco and the Republic of Austria, expressing their wish to move forward in the cooperation between the two legislative institutions, the statement added. On this occasion, Kögeler said that his country considers Morocco as a distinguished partner at the Arab and African level, stressing the importance of parliamentary diplomacy in bringing together the views of the two countries on many issues of common interest. The diplomat also presented an official invitation to the speaker of the House of Representatives to make a working visit to the Republic of Austria, to explore ways to strengthen cooperation between the two legislative institutions, ensuring that a parliamentary friendship group for the North African region has been established in the Austrian parliament. For his part, Talbi Alami voiced his wish to receive the president of Austria’s Parliament and informed the Austrian diplomat of the launch of procedures for the establishment by the lower house of the Morocco-Austria parliamentary friendship group, while reviewing the intensive activities that characterized the October legislative session, the first meeting of the House of Representatives after the recent elections.