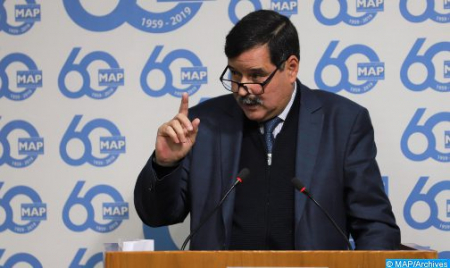 The generals of the Algerian regime are the only ones to blame for the deterioration of the situation in Algeria and they use what remains of their power of nuisance against Morocco with sterile maneuvers aimed at damaging the image of the Kingdom, says the writer and journalist Talaa Saoud Al Atlassi. In an Op-ed published Thursday by the news website ”Machahid 24” under the title ”Morocco, the incurable complex of Mister Tebboune”, he notes that ”the Algerian president never misses an opportunity in his media outings with representatives of a State-controlled press to mention Morocco as if the Kingdom is its raison d’être, giving him the pleasure of the presidential function. ”In all his meetings with the Algerian press, a common denominator, namely that one has the impression that this is happening in an electromagnetic field whose movement engages weakly when it comes to addressing the burning subject of the rise in food prices and its impact on the purchasing power of Algerians and which goes crescendo each time President Tebboune is questioned about democracy and freedom of expression in Algeria to finally reach its climax when it comes to Morocco,” Al Atlassi points out, referring to his interview broadcast last Tuesday by Algerian public television. ”The Algerian president gives the impression each time he pronounces the word Makhzen to be under the influence of a confused emotion, sometimes articulating words in a hesitant way and sometimes showing an indescribable enjoyment,” the writer notes. ”But to tell the truth, the Algerian president does not even understand the meaning of the concept of Makhzen”, he says, before explaining that ”the Makhzen is the identity of a State and represents an innovative governance mechanism that promotes the social role of the State, especially in the fight against the unfortunate effects of drought and this, since the time of Sultan Ahmed Al Mansour Eddahbi who reigned over a vast empire”. ”The Makhzen was the nerve of this State known and recognized at the time for its power, and which did not yield to Ottoman domination,” Al Atlassi underlines. He slams, in this regard, the statements of the Algerian president accusing the Makhzen of being at the origin of maneuvers aimed at provoking dissension between the presidency and the army, at sowing discord and at disseminating fake news, while affirming that the Morocco-Algeria issue ”is definitively closed and that bilateral relations will never be restored”. Al Atlassi notes that ”the Algerian president is unaware that politics does not admit certainties and that it is not exercised by decreeing a break and closing the borders with brotherly and neighboring countries except if it is dictated by a motivation that is justified by hatred and lack of foresight.” “The Algerian generals are very happy with this situation, being the only masters in charge of the State,” the journalist stresses.