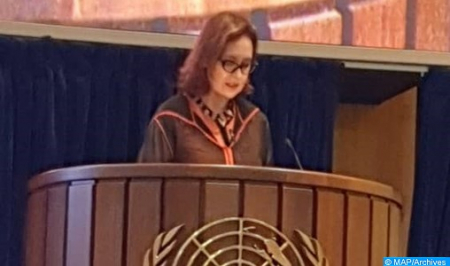 Morocco’s ambassador to Ethiopia and Djibouti, Nezha Alaoui M’Hammdi, and Ethiopia’s lower house speaker, Tagesse Chafo, held a meeting on Friday to discuss the strengthening of cooperation between the two countries’ legislative institutions. During this meeting, the two parties discussed ways to strengthen cooperation in parliamentary diplomacy between the legislative institutions of both countries, as well as at the bilateral level. On this occasion, the Moroccan diplomat congratulated Tagesse Chafo following his re-election as Speaker of the House of People’s Representatives (Ethiopian parliament’s lower house). She reiterated the determination of Morocco to strengthen dialogue between the two parliaments, noting the importance of parliamentary diplomacy as an essential component of political dialogue and bilateral partnership in general. In addition, Alaoui M’Hammdi voiced the wish of Morocco for the creation of a friendship group at the Ethiopian parliament.  The Moroccan ambassador to Ethiopia and Djibouti also recalled that the Kingdom will soon host the Arab-African Summit with the participation of an Ethiopian delegation. For his part, Tagesse Chafo welcomed the quality of bilateral relations between the two countries, stressing the importance of strengthening parliamentary diplomacy with Morocco. The Speaker of the House of People’s Representatives said he was ready for the strengthening of ties between the Ethiopian parliamentary institution and Morocco’s House of Representatives (lower house) and the consolidation of the legal framework governing this cooperation. Tagesse Chafo also welcomed the proposal of the creation of a friendship group between the two countries, affirming his commitment to contribute actively in this direction in order to strengthen the links and interaction between the parliamentary deputies of both countries. Moreover, he welcomed the Moroccan-Ethiopian economic partnership and stressed that both countries attach great importance to South-South Cooperation. The Ethiopian official was pleased, in this regard, with the volume of Moroccan investment in Ethiopia, illustrated particularly by the OCP group, and stressed that the parliament of Ethiopia follows with interest the issue of Moroccan investment in Ethiopia. At the end of this meeting, the ambassador handed to Tagesse Chafo a letter from the Speaker of the Moroccan House of Representatives, Rachid Talbi Alami, in which he congratulated Chafo following his re-election as Speaker of the House of People’s Representatives.