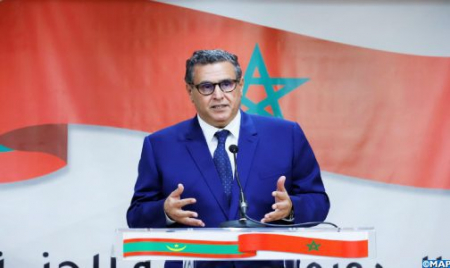 The 8th session of the Moroccan-Mauritanian Joint High Commission held on Friday in Rabat was a “success in all respects”, said the Head of Government, Aziz Akhannouch. During a joint press briefing with the Prime Minister of Mauritania, Mohamed Ould Bilal Messoud, held at the end of this session, Mr. Akhannouch underlined that this meeting was a “success in all respects”, recalling in this regard the signing of several important agreements in various sectors. The Head of Government expressed the wish to see joint cooperation strengthened according to a practical spirit and a special dynamic which would contribute to the concretization of all these agreements and memorandums of understanding signed in the form of investment projects that will be very beneficial to the two countries and to the two brotherly peoples. Morocco and Mauritania are two neighboring countries linked by very distinguished relations reinforced by the great ties of brotherhood between HM King Mohammed VI and His Excellency President Mohamed Ould Cheikh El Ghazouani, he pointed out, emphasizing the importance of taking advantage of this privileged relationship to step up bilateral relations.