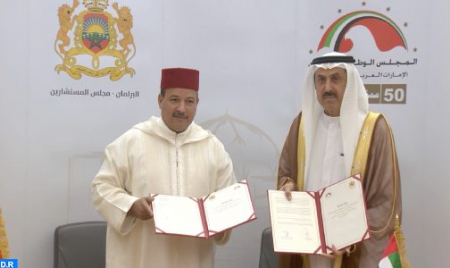 Morocco and the United Arab Emirates (UAE) stressed, Tuesday in Abu Dhabi, their commitment to joint Arab action based on solidarity and effective cooperation, so as to serve Arab issues in harmony with the respect of national sovereignty and integrity of countries. In a joint statement issued after talks between speaker of the House of Advisors, Naama Mayara and president of the Federal National Council of the United Arab Emirates, Saqr Ghobash, the two sides stressed that the joint Arab action is a suitable framework for consolidating the pillars of stability and development in the region. They also noted the need to continue coordination between the two institutions in the framework of the Forum of South-South Parliamentary Dialogue, recently launched in Rabat, through the Association of Senates, Shoora and Equivalent Councils of Africa and the Arab world (ASSECAA), the consolidation of openness to regional and international parliamentary unions, as well as strengthening ties between the ASSECAA and the parliaments of Latin America and the Caribbean. Both parties also called for strengthening the openness of both institutions to all joint initiatives that can consolidate institutional relations and raise them to a level of productive partnership. In this regard, the two institutions highlighted the importance of continuing to strengthen the exceptional relations of parliamentary cooperation uniting them, through the exchange of visits and expertise, consolidate fruitful dialogue based on the group of parliamentary fraternity, in order to unify the strategic visions for the achievement of sustainable development and the promotion of peace, stability and coexistence on the regional and international levels, stressing the intensification of coordination and consultation between the two Councils in the various regional and international parliamentary forums, on issues of common interest, to achieve complementarity and convergence of views between the two brotherly countries. The two parties also highlighted the depth of the relations linking the two countries, which draw their strength from the close fraternal ties between HM King Mohammed VI and His Highness Sheikh Khalifa bin Zayed Al Nahyan, as well as between the two brotherly peoples, whose foundations were laid by the late HM Hassan II and Sheikh Zayed Bin Sultan Al Nehyane.