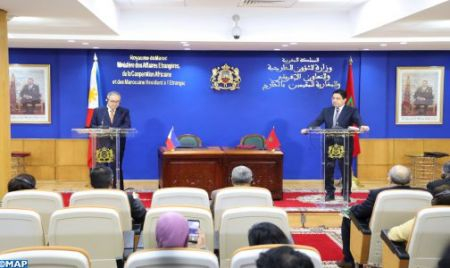 Philippine Foreign Minister Teodoro Locsin Jr. welcomed, Thursday in Rabat, the New Development Model (NMD) that Morocco has adopted, which is based on an advanced, comprehensive and integrated approach. In a joint press briefing with Nasser Bourita, Minister of Foreign Affairs, African Cooperation and Moroccans Abroad, Locsin Jr. praised the “advanced vision of the Kingdom of Morocco through the NMD, which takes an advanced, comprehensive and integrated approach, under the leadership of HM King Mohammed VI”. “The Philippines, in turn, aims to consolidate development in its territories to ensure a productive and healthy life for its citizens,” added the head of Philippine diplomacy who co-chaired with Bourita the 2nd session of Morocco-Philippines Political Consultations. In addition, he expressed the firm support of his country to the sovereignty and territorial integrity of Morocco, while describing as “solid basis” the autonomy plan to resolve the artificial regional dispute over the Moroccan Sahara. The Philippine minister said he aspired to strong and fruitful relations with Morocco, especially as diplomatic ties between the two countries will reach their fiftieth anniversary in 2025. Morocco and the Philippines signed, on Thursday, an agreement and two memoranda of understanding on the occasion of the 2nd session of Political Consultations between the two countries. The Philippine Embassy in Rabat was inaugurated during a ceremony presided over by Locsin Jr. and Ambassador Fouad Yazough, Director General of Bilateral Relations at the Ministry of Foreign Affairs, African Cooperation and Moroccans Abroad.