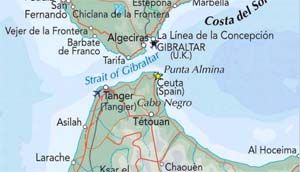 There are symbols which are at the very least astonishing.
Imagine that the Queen of England goes to Gibraltar on Spain’s Independence Day. It is certain that even over scrupulous Spanish journalists would have found something fishy about it.
Now, imagine that king Juan Carlos goes to Sebta and Mellilia the day of “the green march’s” birthday. Impossible, right? It however happened, a week ago.

Over there, the big silence even if the Spanish press had accustomed us to more talks.
Sebta and Mellilia have been under Spain's control since it conquered the enclaves in 1580 and 1497 respectively, keeping them as military bases because of their strategic locations on the Mediterranean coast and Morocco has never stopped claiming the two occupied cities since its independence in 1956.
the Royale visit to Sebta and Mellilia territories was handled like a trifle, an “exotic” claim according to Spanish media's, which find all their liveliness however as soon as the subject relates to Gibraltar.
Can we really affirm without being ridiculous that the Spanish claims on Gibraltar and those of Morocco on Sebta and Mellilia are not on the same scale?
Hypocrisy is there, actually, because neither Madrid, nor London wants to admit that they created zones of prosperity with reduced taxes enabling them to support their growth and, on the occasion, to shelter some companies’ screens there. This will be out of question, because it is a subject which would likely roughcast the European Commission and its very strict rules about the economics of the Community. It is a Matter of big money sheltered moderately behind a nationalist rhetoric; this same nationalist rhetoric, paradoxically, finds its limits when one questions the Spanish representatives on the revenues provided from both “sides.” then, the mouths are bent and the ears are closed again.
Would be thus that the famous Spanish nationalism is between two cartons of cigarettes free of taxes?