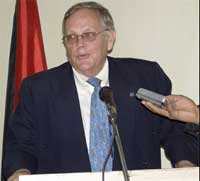 Special correspondent to the Secretary General of the UN, Julian Harston, announced lately that the talks between the kingdom of Morocco and the Polisario front will resume soon in the same location as the two preceding rounds, namely Manhasset, in New Jersey. Even if the town of Geneva in Switzerland was regularly quoted like having to hold this third phase of negotiations, it is finally in the United States that seems to be profiled the ground most favorable to the continuation of the discussions in order to leave the dead end.
This decision, according to the followers of the Sahara file, is not innocent. Indeed, the United States seems to play an increasingly important role in the peaceful resolution of the conflict, and the proximity of Manhasset to the diplomatic representations of the UN allows more easily, taking the temperature of the various implied countries.
The Moroccan Foreign Minister, Taïeb Fassi Fihri, have surprised when announcing that the Algerian position was likely to move, which would lead, obviously, to a quasi-immediate resolution of the conflict. Indeed, the file of the Sahara does not relate to only Morocco since the stakes are now of a regional nature, but relate in particular to the revival of the regional process of integration.