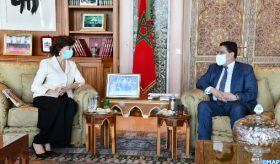 Minister of Foreign Affairs, African Cooperation and Moroccans Abroad, Nasser Bourita, held talks, Thursday in Rabat, with Director-General of the United Nations Educational, Scientific and Cultural Organization (UNESCO), Audrey Azoulay. During this meeting, the two parties stressed the importance of the partnership and cooperation between Morocco and UNESCO and discussed ways to strengthen them further. Earlier in the day, Mrs. Azoulay was received by the Head of Government, Aziz Akhannouch. The working visit of the Director-General of UNESCO to Morocco falls within the framework of the commemoration of the 10th anniversary of the listing of the city of Rabat as a world heritage site.