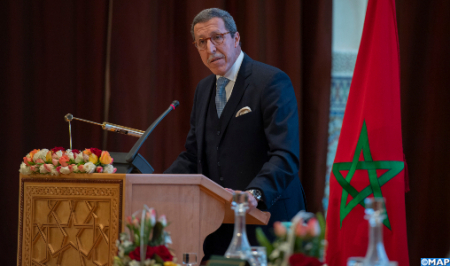 “The polisario armed separatist group and Algeria share responsibility for the recruitment of children in the Tindouf camps. They are therefore guilty of war crimes,” said Morocco’s Ambassador, Permanent Representative to the UN in New York, Omar Hilale. The diplomat was speaking at an international event held, Wednesday in Rabat, by the National Commission on International Humanitarian Law (CNDIH, under the theme “Protecting children during humanitarian crises.” In his statement on “International law and child soldiers,” Hilale highlighted the progress achieved regarding international child protection standards over the last three decades since the entry into force of the 1989 International Convention on the Rights of the Child, noting that these international instruments have categorized the conscription or enlistment of children in armed forces or groups as a war crime. In this regard, he deplored that despite this binding -international conventions, Security Council resolutions and the Statute of the International Criminal Court-, and non-binding international normative arsenal -resolutions of the UN General Assembly and the Paris Principles of 2007 and the Vancouver Principles of 2017-, which frame the protection of children in times of conflict, children in the camps of Tindouf, Algeria, continue to be exploited with impunity as child soldiers by the polisario. The diplomat, who illustrated his remarks with authentic photos and videos showing the military training to which children in these camps are subjected by the “polisario”, highlighted the similarities in the techniques of training, recruitment, and indoctrination to armed violence used by the “polisario” and terrorist groups such as ISIS and Al-Qaeda. Hilale also highlighted the differences between the peaceful and promising destiny offered to children at schools in the Moroccan Sahara and that of violence and terrorism to which the “polisario” prepares children in the camps of Tindouf in the Algerian desert. The diplomat condemned Algeria’s complicit silence, or incitement to this war crime, which has been perpetuated for decades on its territory, in total violation of its international obligations under the instruments to which it is a party, and which require it to protect these children. Algeria, he said, is all the more guilty in persisting in refusing to census and register refugees from the Tindouf camps, in violation of the 1951 Geneva Convention on Refugees and of numerous United Nations Security Council Resolutions, thus depriving these children of the protection they are entitled to under international humanitarian law. Ambassador Hilale called on the International Community and International and Regional Organizations to condemn this war crime and to do their utmost to protect children in all regions of the world, and in the Tindouf camps in particular, from military recruitment by armed groups, especially by the polisario. The ambassador also made a series of recommendations for the implementation of measures to prevent and protect children from recruitment, including the registration of children in the refugee camps and ensuring their access to education. The diplomat, who called for firm and urgent accountability measures against all those who incite, encourage or engage in the recruitment of children in armed conflict, also recommended that the delivery of humanitarian assistance should be linked to the full respect of children’s rights and that any armed group guilty of indoctrination and/or recruitment of children should be excluded from assistance.