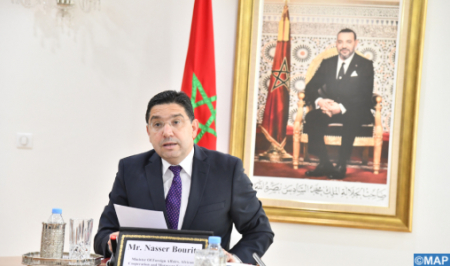 “Beyond the pandemic, Morocco has always strived to be a catalyst for development and a provider of peace and security in Africa”, said, on Saturday, the Moroccan minister of Foreign Affairs, African Cooperation and Moroccans Abroad, Nasser Bourita. Mr. Bourita, who was speaking at an online ministerial preparatory meeting for the 8th Tokyo International Conference on African Development (TICAD), stressed that the Kingdom “resolutely ensures that it remains so in accordance with the vision of His Majesty King Mohammed VI”, noting that Morocco’s election to the AU Peace and Security Council for the period 2022-2025, attests to this commitment. He noted that “to this pandemic of which we are – hopefully – seeing the end, all the Continents have paid a heavy price”, adding that the one that Africa has consented to is, undoubtedly, the most substantial. “The pandemic will end, and its repercussions on economies and development will remain”, said the minister, considering that the resistance and resilience of Africa – Governments and populations, who have been forced to fight on several fronts at the same time – must be welcomed, objectively. To the fronts of socio-economic development, political stability and food security, is now added that of health security, he explained, assuring that “Morocco has been and remains in the forefront in Africa – to take up this challenge”. “In a major development, HM King Mohammed VI launched, in January 2022, an industrial vaccine manufacturing unit. This Project will contribute to meeting the needs of the Kingdom, at the same time as it will contribute to secure the health sovereignty of African brotherly countries,” he recalled. According to Mr. Bourita, “if the pandemic has been an unprecedented systemic challenge, it has also been a unique indicator of the credos to invest and the opportunities to be seized”. “In this area, we remain convinced that the partnership with Japan can play a qualitative role,” he said. As with any endeavor, investment is the key, he pointed out, noting that Japanese FDI in Africa has, however, dropped from $10 billion in 2010 to $6.9 billion on the eve of the pandemic. “At the time of post-Covid recovery, we are full of hope that these investments will return to the upward trend which was theirs between 2007 and 2010”, said Mr. Bourita, adding that currently “Africa needs investments: the areas of education, vocational training, health and renewable energies are cardinal to the consolidation of resilient economies on the Continent”. Public-private partnerships – on which TICAD has had the foresight to bet, are an ideal formula for carrying out structuring and large-scale projects, the minister underlined, noting that “joining private sector funds to the guarantees provided by the State is also a way of multiplying the commitment of some 900 Japanese companies present in Africa, and encouraging others to join them”. At the level of Africa, TICAD can be a lever for the development of entrepreneurship and the creation of wealth, in particular through the strengthening of new digital technologies, he said, adding that the Covid-19 pandemic has succeeded in convincing several brotherly African countries of the need to accelerate this process, which involves a great mobilization of equipment and knowledge. TICAD benefits from being part of this dynamic, insisted the minister, explaining that this niche coincides with Japan’s primary resource: technology; as much as with Africa’s primary resource: its youth and its human capital. “We welcome this as a priority for TICAD,” he went on. He also said that “the consolidation of our actions within TICAD to support efforts in favor of youth, will be a sure vector for post-Covid economic recovery on the Continent, with a view to ensuring sustainable, inclusive and inequality-reducing growth”. The development of women’s entrepreneurship, in the digital age, is also an opportunity for the empowerment of African women and the sustainable development of current and future generations, he underlined, noting that the entrepreneurship remains, generally speaking, the most credible promise of a better future. “In addition, the challenges related to the COVID-19 pandemic have reminded us of the importance of stepping up our efforts to strengthen our health, access to care and social protection systems,” said Mr. Bourita, adding that TICAD, which has made the improvement of universal health coverage one of its priorities, has an important role to play in supporting African efforts in this direction. In this regard, he continued, “conclusive experiences exist at the level of the Continent. That of Morocco is one of them, and capitalizes on useful experience and good practices”, recalling that in the midst of the crisis, in April 2021, Morocco has launched the project to generalize social protection, under the impetus of His Majesty King Mohammed VI. The minister also stressed that the Kingdom “will remain committed alongside Japan and all partners for the achievement of the joint objectives of TICAD”, adding that “our conviction is that this is a long-term job, which is built in the time”. “As such, we welcome the efforts undertaken for the establishment in 2021, for the first time, of a platform for monitoring the implementation of the Yokohama Action Plan, which constitutes an important step forward for a capitalization experience within TICAD,” he said. He added that Morocco will remain committed, at the national and regional levels, in the various areas of intervention of TICAD, and willing to humbly share its experience with its African brothers, within the framework of an approach based more on the appropriation, sharing of experiences and tripartite cooperation. “In this, Morocco remains convinced – as it has always been – that Africa must be treated as an equal partner, and considered for what it is: that is to say, the reservoir of the youth of the world and the reservoir of the world’s growth. In other words, the future of the world economy”, concluded Mr. Bourita. The Tokyo International Conference on African Development (TICAD) was launched in 1993 by the Government of Japan, to promote Africa’s development, peace and security, through the strengthening of relations in multilateral cooperation and partnership. The 8th edition of TICAD is scheduled for August in Tunisia.