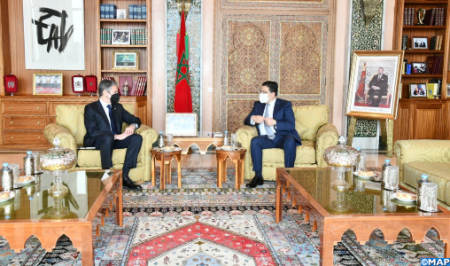 The U.S. position on the Moroccan autonomy initiative in the Sahara has been constant for several U.S. administrations, said Tuesday the Minister of Foreign Affairs, African Cooperation and Moroccans Abroad, Nasser Bourita. The Moroccan autonomy plan is the only solution supported by the United States of America and several other countries such as Spain recently, Germany and other Arab and African states, said Bourita who spoke at a joint press conference with U.S. Secretary of State Antony Blinken, at the end of their talks in Rabat. In this regard, Bourita recalled the message sent to HM King Mohammed VI by the President of the Spanish government, Pedro Sánchez, in which Spain considers the Moroccan autonomy initiative as the most serious, realistic and credible basis for resolving the dispute over the Sahara, reporting a “positive development that we welcome and which will pave the way for a new page in the register of relations between the two countries.” The Spanish position is “not isolated” as it is part of an international dynamic of support for the Moroccan autonomy initiative as a realistic and credible solution to the artificial dispute over the Sahara, the minister pointed out, stating that the United States of America, France, Germany and several Arab and African countries share the same position. It is time for Europe to leave its “comfort zone” in connection with this conflict, because “support for a process to find a solution to a dispute is hardly support for its resolution,” said Bourita, adding that “it is easy to say that we support this process when it could last for decades.” It is essential “at this stage to move to efforts oriented towards supporting the autonomy initiative under Moroccan sovereignty as a solution to the artificial dispute over the Sahara,” he concluded.