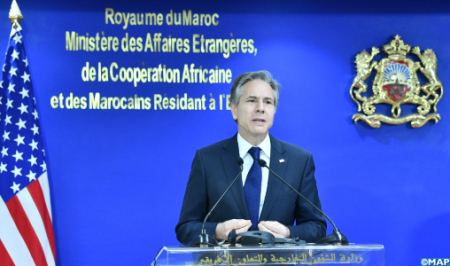 U.S. Secretary of State Antony Blinken reiterated, on Tuesday in Rabat, the United States’ position in favor of the Moroccan Autonomy Plan in the southern provinces. During a joint press conference with Moroccan Minister of Foreign Affairs, African Cooperation and Moroccans Abroad, Nasser Bourita, held at the end of their talks, Blinken stressed that the United States considers the Moroccan autonomy plan as a serious and realistic solution, which meets the aspirations of the Sahara’s populations. He also expressed his country’s support to the UN Secretary-General’s Personal Envoy, Staffan de Mistura, in the conduct of the political process on the Sahara issue, under the auspices of the United Nations, expressing his consideration for Morocco’s support to the mission of the Special Envoy.