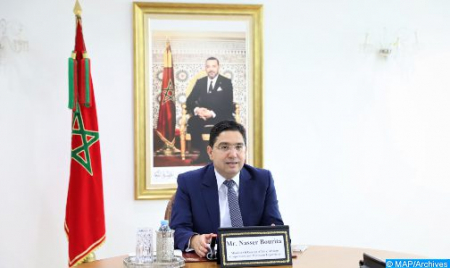 The 1st session of the Morocco-Comoros Joint Commission kicked off Thursday in Dakhla. This meeting was co-chaired by minister of Foreign Affairs, African Cooperation and Moroccans Abroad, Nasser Bourita, and the Minister of Foreign Affairs and International Cooperation of the Union of the Comoros, in charge of the Diaspora, Dhoihir Dkhoulkamal. This session is an opportunity to examine new prospects for the consolidation of relations of cooperation between Morocco and the Union of the Comoros and build fruitful partnerships in several areas, in accordance with the guidelines of the Heads of State of the two countries, His Majesty King Mohammed VI, and His Excellency President Azali Assoumani. Bourita, speaking at a joint press conference with his Comorian counterpart, said that the holding of this session reflects the development recorded at the level of bilateral relations in recent years, in harmony with the vision of HM the King and the President of the Union of Comoros. After stressing that this is the first meeting of the joint commission at this level, the minister noted that this is also the first session held in the southern provinces of the Kingdom. “We have held many sessions of joint commissions, but this one will go down in history as the first session held by Morocco with a brotherly and friendly country in the Moroccan Sahara,” he pointed out, adding that this is “a first that will be followed by the holding of other sessions of joint commissions in the future.” The organization of this session in Dakhla reflects the consistent position of the Union of Comoros regarding the territorial integrity of the Kingdom, said Bourita, recalling that the Union of Comoros was the first state to open a consulate in Laayoune, as part of the dynamics of consular openings in the southern provinces. “This friendly country is a pioneer in supporting the territorial integrity of Morocco,” said the minister, stressing that the Union of Comoros “has always been a sincere voice in supporting the territorial integrity of the Kingdom” and that the current stage “is important in our bilateral relations and reflects the sincerity of these ties.” He also said that 11 agreements in various fields were signed on this occasion, “which reflects the ambition marking the bilateral relations,” saying that the next visit will see the signing of 16 other agreements, as part of strengthening the bilateral legal framework. “The will of HM the King is to accompany the vision of His Excellency President Azali Assoumani to develop the economy and achieve development for the benefit of the brotherly Comorian people,” highlighted Bourita, noting that this will was reflected through the importance of the delegation that participated in 2019 in the first meeting on the financing of development projects in the Union of Comoros. For his part, Dhoulkamal recalled that Morocco and the Union of Comoros have “long-standing relations rooted in history,” adding that the ties of friendship and brotherhood between the two countries have seen more growth and progress in the era of HM King Mohammed VI and the President of the Union of Comoros, Azali Asoumani. “We have always defended and will continue to defend Morocco’s territorial integrity,” he said. “It is normal that we were the first country to open a consulate general in the southern provinces because, whenever necessary, the Union of the Comoros will be there to support Morocco.” The Union of Comoros was also the first country to sign framework agreements for the development and promotion of prosperity of the two peoples, he stressed, expressing the willingness to “continue to work together for the benefit of the peoples of the two brotherly countries.