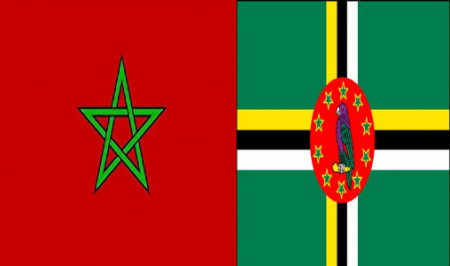 Morocco and the Commonwealth of Dominica have reiterated their commitment to accelerate the implementation of the roadmap of bilateral cooperation (2022-2024), signed Thursday in Dakhla. This roadmap covers several key sectors, such as education, vocational training, agriculture, health and tourism, said a joint communiqué issued after a meeting between the minister of Foreign Affairs, African Cooperation and Moroccans Abroad, Nasser Bourita, and the Prime Minister of the Commonwealth of Dominica, Roosevelt Skerrit, on the occasion of the opening of a consulate of the Organization of Eastern Caribbean States (OECS) in Dakhla. The two sides also expressed their willingness to deepen and further consolidate their cooperation through the exchange of experiences and expertise in various areas of common interest. “The two ministers highly appraised the present level of bilateral relations in all fields,” adds the same source, noting that the two officials discussed “a broad range of issues related to state and prospects of further expansion of bilateral cooperation between the Kingdom of Morocco and the Commonwealth of Dominica to meet the respective aspirations and ambitions of the Governments of the two friendly countries.” In addition, Skerrit expressed the “great appreciation” of the Commonwealth of Dominica for the vision of His Majesty King Mohammed VI, for a south-south cooperation, based on effectiveness, solidarity and pragmatism, says the communiqué, affirming that the Royal vision is upholding stability and security in the Caribbean region through tangible socioeconomic projects. On the issue of Morocco’s territorial integrity, Skerrit reaffirmed the recognition of the Commonwealth of Dominica of the sovereignty of the Kingdom of Morocco over its entire territory, including the Moroccan Sahara, expressing his country’s full support to the Moroccan Autonomy Plan, as the unique basis for a political solution to this regional dispute, in full respect of Morocco’s territorial integrity and national sovereignty. “In this spirit, the Commonwealth of Dominica opened a General Consulate in Dakhla on behalf of OECS, representing the six Eastern Caribbean member States,” says the same source. “This very significant and promising diplomatic presence will certainly represent a great opportunity to further boost bilateral exchanges between the Kingdom of Morocco and the six Eastern Caribbean States.” In this regard, Bourita informed Prime Minister Roosevelt Skerrit of the latest developments and underlined the international community’s support to Morocco’s autonomy plan under the sovereignty of the Kingdom of Morocco, as the unique basis for a consensual political solution to the regional dispute, reiterating the Kingdom’s commitment to the ongoing political process under the exclusive auspices of the United Nations. According to the statement, the two sides exchanged views on various international issues and agreed to coordinate their action to promote regional cooperation between the African and the Caribbean countries. They also agreed to maintain and reinforce a permanent and constructive dialogue between Morocco and the organizations of OECS and CARICOM.