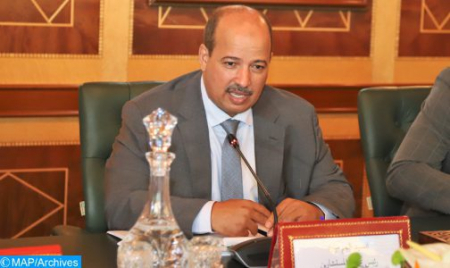 The Speaker of the House of Advisors, Naama Mayara, underlined that parliamentary diplomacy, which is part of the functions of the parliamentary institution, is used as a tool for the defense of Morocco’s strategic issues, particularly the territorial integrity of the Kingdom. In an interview with MAP, Mr. Mayara highlighted the different aspects of parallel diplomacy to which all the components of the House of Advisors (upper house) contribute through various initiatives (conferences, forums and meetings), as well as a remarkable presence in the various regional and international parliamentary bodies, in addition to the ties with legislative institutions around the world in accordance with the Kingdom’s policy in the framework of South-South cooperation. In this regard, he referred to the special ties linking the Moroccan parliament to the Latin American and Caribbean Parliament (Parlatino) in which Morocco has an observer status, adding that the interaction of the House of Advisors with this institution, which brings together 23 countries, led to the inauguration of the “King Mohammed VI Library” at the headquarters of the Parlatino, in the Republic of Panama. The privileged position of the Upper House in this region symbolizes the policy of South-South cooperation carried out by Morocco in accordance with the High Guidelines of HM King Mohammed VI, he pointed out. Based on this logic, said Mr. Mayara, relations also developed with the Central American Parliament (Parlacen) within which the House of Advisors had an observer status, before becoming an “advanced partner”, which reflects the important diplomatic action carried out by the House. In this regard, the Speaker of the Upper House noted that this diplomatic action at the level of Latin America led to the withdrawal by a large number of countries in the region of their recognition of the puppet entity, adding that parliamentary diplomacy is also active in making Morocco a gateway for the countries of this region to Africa, particularly in terms of economic exchanges. Mr. Mayara also noted that during the period between the two legislative sessions, the House of Advisors hosted the 11th Congress of the League of Shura Councils, Senates and Similar Councils of Africa and the Arab World, marked by the participation of 31 delegations and 19 speakers of Senates and similar councils. In this regard, he welcomed the sound decisions issued by this congress, relating essentially to the right of any State to defend its sovereignty and territorial integrity, in addition to the rejection of terrorism, violence and extremism. He added that in parallel with this congress, the House of Advisors also hosted the South-South Parliamentary Dialogue Forum of Senates and similar councils from Africa, the Arab world, Latin America and the Caribbean, which has been marked by the designation of Rabat as capital of South-South cooperation. Mr. Mayara also pointed to the launch of a Forum for parliamentary dialogue between the countries of Latin America, Africa and the Arab world, which will make it possible to build real ties with a certain impact on parliamentary action, but also on the development of common programs and economic complementarity between the countries of the South. Regarding the latest developments in the Moroccan Sahara issue, Mr. Miyara mentioned the new stance of the Spanish government, which considers the autonomy plan presented by Morocco in 2007 as the most serious, realistic and credible basis for settling this dispute. He stressed the importance of Spain’s new stance, noting that this neighboring country is historically part of this conflict and remains influential at the level of the United Nations on the issue of the Moroccan Sahara. Madrid is now convinced, after more than four decades, that “autonomy is the only possible solution to the issue of the Sahara”, he underlined.