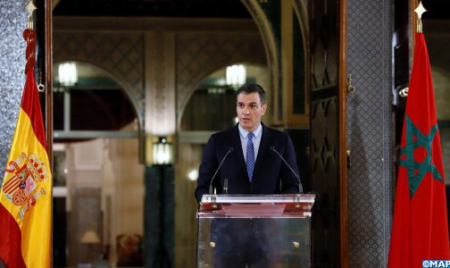 HM King Mohammed VI has played a “decisive and constructive” role in the opening of a new stage of the Moroccan-Spanish partnership, said, Thursday in Rabat, the President of the Spanish government, Pedro Sanchez. “I would like to commend the decisive role played by HM King Mohammed VI to end the crisis between the two countries,” said the head of the Spanish Executive at a press briefing, on the occasion of his visit to the Kingdom at the invitation of the Sovereign. Sanchez also expressed his gratitude to HM the King for the constructive role of the Sovereign which has allowed to start this new stage of understanding and good neighborliness between Spain and Morocco. The President of the Spanish Government also highlighted the interest shown by HM the King, during the last months, in the need to reach an agreement and define solid foundations for a new relationship between the two countries. Aware of the magnitude and strategic importance of the ties that unite them and the legitimate aspirations of both peoples to peace, security and prosperity, Morocco and Spain are today embarking on the construction of a new stage in their bilateral relationship, read the joint statement adopted Thursday at the end of extensive discussions between His Majesty King Mohammed VI and the President of the Spanish Government, Pedro Sanchez.