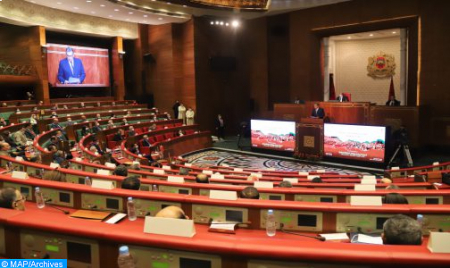 The Head of Government, Aziz Akhannouch, stressed, Monday, that the government is attached to all its commitments contained in the government program, especially on the social component. The protection of the citizen’s purchasing power, investment in the social sectors and the strengthening of the protection function are a national duty that the government will ensure to honor, said Akhannouch who was answering a central question in the House of Representatives on “the situation of the national economy in the light of climate and geostrategic changes”, during a plenary session devoted to the monthly oral questions addressed to the Head of Government. He also pointed out that the Moroccan and global economy are going through a difficult period, noting that the Russian-Ukrainian conflict, the post-covid period and the repercussions of low rainfall will have an impact on the financial and economic balances. “However, it is necessary to ensure that the government still holds to its commitments contained in the program and which has obtained your confidence especially in its social component,” added the Head of Government. In this regard, he said that the government is determined to mobilize the necessary resources to cope with the financial impact of this difficult economic situation, and preserve the macroeconomic balances, as well as the continued funding of projects provided for in the appropriation bill, notably the generalization of social protection. In this sense, Akhannouch noted that the implementation of the large-scale project of social protection generalization has made significant progress, and this, through the approval, during the first weeks of the government’s mandate, of not less than 20 decrees. These decrees are mainly aimed at the categories of professionals, independent employees, and non-salaried persons exercising a special activity, whose number exceeds 3.5 million members, which will allow 11 million people to benefit from social protection, he said, adding that the number of members of these categories in the National Fund for Social Security (CNSS) has surpassed, until the beginning of April, one million and 700,000. In addition, the Head of Government said that the resources allocated are sufficient to finance the social protection program, since the total resources of the Support Fund for Social Protection and Social Cohesion under 2022, amount to 13.4 billion dirhams. He said that about 4.2 billion dirhams will be allocated to the generalization of compulsory health insurance for the benefit of vulnerable people currently benefiting from the Ramed program and 5 billion dirhams will be earmarked to the financing of various social programs underway, including direct support for schooling (Tayssir, one million school bags ..). According to Akhannouch, the government will also continue the reform of the Moroccan health system, which it launched in application of the High Royal Directives, in view of the growing challenges caused by the current global health crisis on the one hand, and the requirements for the success of major social projects related to social protection on the other. In this context, he stressed that efforts will be directed to the upgrading of health care, mobilizing the financial resources necessary to improve the state of primary health care centers and provincial, regional and university hospitals, in addition to the development of human resources in the sector and the establishment of a new governance for the health system. He also stressed that the government will work in parallel to the continuation of the reform of education and will ensure that the public school resumes its dual role of transmission of knowledge and social promotion, and this, through the acceleration of the generalization of preschool education in addition to the development of reception facilities for the care of children under four years. It is also, he said, a question of training educators specializing in early childhood, in addition to working to strengthen the basic knowledge of children from primary school and support the education of the needy, especially in rural areas, through the consolidation of efforts related to the creation of collective schools and the development of transport and school canteens. The government, he went on, endeavors to consolidate the reform of the teacher training system and launch a program to upgrade training centers. On the other hand, Akhannouch stressed that the government will continue to encourage the entrepreneurial initiative by consolidating the procedures of support for small entrepreneurs and adopting a set of measures in the reform of the procurement system, including preference in public procurement, the encouragement of subcontracts. The government’s actions, he added, are also meant to breathe new life into the program “Intelaka” and implement the program “Forsa”, which was launched on April 7. It aims to grant project holders, loans without interest, with support, guidance and training. In parallel with these projects, the government will continue its efforts to promote employment by completing the development of the investment charter, accelerating the pace of public investment, including those relating to the Mohammed VI Fund, in addition to the implementation of the program “Awrach”, which was launched in all regions and provinces of the Kingdom, and for which a budget of 2.25 billion dirhams has been allocated for this year. He stressed that the government will focus on the continued implementation of various sectoral policies including “Generation Green 2020-2030” and industrial transformation and those related to infrastructure, tourism, crafts and social economy.