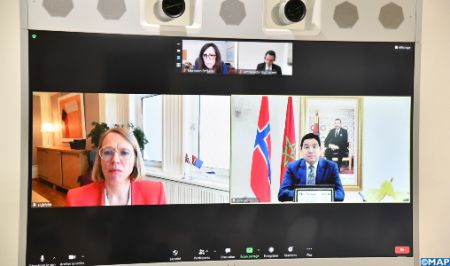 Minister of Foreign Affairs, African Cooperation and Moroccans Abroad, Nasser Bourita, on Tuesday, held talks through videoconferencing, with his Norwegian counterpart, Anniken Huitfeldt. On this occasion, the two top diplomats praised the excellence of bilateral relations and reiterated their common will to strengthen them further, said a statement released by the Ministry. Both FMs reaffirmed their commitment to continue strengthening the political dialogue as well as economic and trade partnership. During this meeting, Huitfeldt confirmed her participation in the Ministerial Conference of the Global Coalition against Daesh, due to take place in Marrakech on May 11, 2022, welcoming Morocco’s key role as a partner and hub for peace and stability in the region. The two ministers noted the convergence of views on regional and international issues of common interest, including the Sahel and the Middle East. On the multilateral level, the two parties agreed to continue the dialogue on priority issues within international fora through the launch of joint initiatives, the statement concluded.