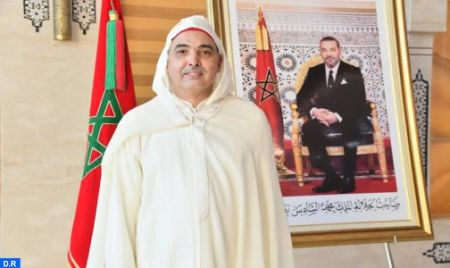 His Majesty King Mohammed VI, Chairman of the Al-Quds Committee under the Organization of Islamic Cooperation, places the Palestinian cause and the issue of Al-Quds Al-Sharif at the top of His priorities at the same rank as the Kingdom’s national cause, Morocco’s Ambassador to Palestine Abderrahim Meziane said. In a statement to Palestine’s official television on Monday, the diplomat said HM King Mohammed VI fulfills his mission as chairman of the Al-Quds Committee through the Bayt Mal Al-Quds Agency, which is the executive arm of the Al-Quds Committee, under daily programs, plans and initiatives in the sectors of health, education and housing to support the resistance of the people of Al-Quds, in addition to the personal supervision of His Majesty of the religious and civilizational character of the Holy City. Morocco, he said, continues its ongoing support to the cause of Al-Quds through its active membership in the Arab Ministerial Committee for International Action against Illegal Israeli Policies and Measures in Al-Quds, affiliated to the Arab League, which will meet in Jordan next Thursday. Morocco, the diplomat added, has always defended the Palestinian cause and Al-Quds Al-Sharif in all the Arab and Islamic summits it has hosted, and which have recorded multiple achievements. “The Kingdom, as an active member of international organizations, does not miss any opportunity in UN, Arab or Islamic meetings, or within the framework of its strong relations with international actors and influential forces in the world, to defend Al-Quds and the rights of the Palestinian people,” Meziane said. Morocco and Palestine share several characteristics related to the struggle for independence and the completion of territorial integrity in light of great difficulties and challenges, he went on. The diplomat also recalled the solidarity, great interest and follow-up by the Kingdom of Morocco, King, government and people, of the latest raid of the Al-Aqsa Mosque by the Israeli occupation forces. He stressed in that regard that the Kingdom of Morocco was quick to denounce these attacks, expressing its strong condemnation of the raid conducted by the Israeli occupation forces on the Al Aqsa Mosque, the closing of its gates and the attack on unarmed worshipers in the mosque compound, causing many injuries.. In a statement, the ministry of Foreign Affairs, African Cooperation and Moroccans Abroad said that this blatant aggression and methodical provocation during the holy month of Ramadan against the sanctity of the mosque and its place in the heart of the Islamic Ummah will only fuel feelings of hatred and extremism and destroy the chances of reviving the peace process in the region.