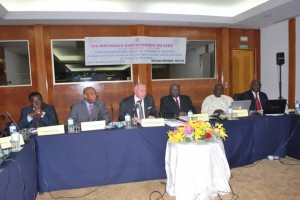 The Polisario, artificially created at the time of the Cold War by Libya’s Muammar Gaddafi and Algeria’s Houari Boumediene to destabilize Morocco, has become a source of instability throughout the Maghreb region and the Sahel.
Professor Charles Saint-Prot, Director of the Paris-based Observatory of Geopolitical Studies (OEG) warned against the destabilization risks posed by the Polisario to all countries of the region and stressed the urgency to resolve the Western Sahara conflict.
Pr. Saint-Prot sounded the alarm during Matinales Geopolitics, a debate held in Dakar on April 17 by the local office of the French Diplomatic and Strategic Studies Center (French acronym CEDS) in partnership with OEG. The event was held under the theme “Counterterrorism, human rights and security: analysis of the hidden face of the crisis in the Sahel-Sahara strip from Tindouf to Mali.”
He explained that this artificial conflict increases the insecurity risks in the Sahel region and ensured that the Morocco proposed autonomy plan for Western Sahara is an “innovative roadmap that takes into account local realities and the particular identity of the people of the region.”
Described as “serious” and “credible,” this autonomy plan model could even serve as an example for advanced regionalization in some other countries.
“The international community must have enough lucidity to understand that this conflict has lasted for too long and that it poisons the entire region,” he noted, calling for disarming the Polisario and for settling the issue on the basis of the autonomy initiative proposed by Morocco since 2007.
We should not continue, in the name of a dummy balance, to minimize or hide the responsibility of Algeria, which is the main party to the conflict that it has created and continues to kindle. “All this has lasted too long,” he insisted.
“Bottom line, the issue is not a question of decolonization but a form of aggression perpetrated by Algeria which hosts on its territory a separatist group opposed to Morocco,” he said, adding that in contrast, Morocco showed that it could secure its southern provinces while improving its human rights policy.