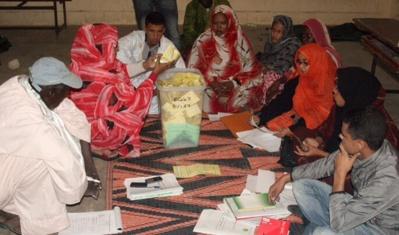 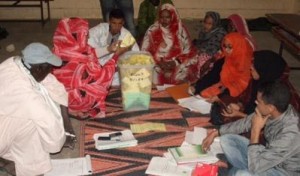 Some special voters were filmed by the Algerian state television casting their ballots during the Algerian presidential elections of April 17.
The TV channel presented them as Sahrawi refugees from the Tindouf camps, while they were actually Transhumant people of various origins (southern Algeria, Mauritania, Mali etc.) who have been installed in these camps and given Algerian identity cards. These IDs allowed them to participate in the vote at the call of the Polisario leader, Mohamed Abdelaziz.
This vote did not go unnoticed. The Canarian newspaper “El Dia”, which is known for its pro-Polisario stands, published on Saturday a long story entitled “Refugees in their Own Country.”
“What is happening in Algeria with the so-called Sahrawi refugee camps in Tindouf is utterly Kafkaesque,” writes the author of the story, Ramon Moreno. He wonders how so-called refugees, self-proclaimed Sahrawis, could vote in the latest presidential elections in Algeria as if they were genuine Algerian citizens.
The majority of the so called Sahrawis confined in the Tindouf camps are in fact bearing the Algerian, Mauritanian, Malian or even Spanish nationality, as is the case of the Polisario representative in the Canary Islands, Hamdi Mansour, and the majority of Sahrawis living in the archipelago who receive a monthly salary from the Spanish government.
During the presidential elections in Algeria, won at an overwhelming majority of 81.53 per cent of votes by President Abdelaziz Bouteflika, for a fourth consecutive term, despite his serious health condition, the votes were cast “not only by the Algerians, but also by the leaders of the Polisario-proclaimed Sahrawi Republic (SADR) who campaigned in the Tindouf camps in favor of Bouteflika,” writes the author of the story.
According to the journalist, these are virtual Algerians that are part of the electorate, that can vote +legally+ and that continue to serve the aims of the Algerian dictatorial and corrupt regime and its cronies of the whimsical SADR.
This is a tall tale but strangely enough, the watchful officials and experts of the UN and other specialized agencies have seemingly missed it all while they focus all their attention on Morocco and on Western Sahara.