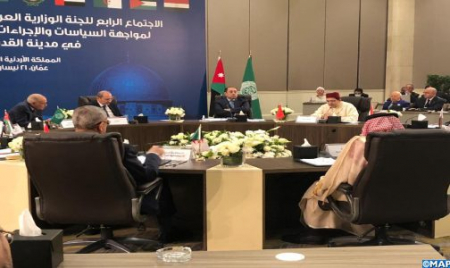 Morocco, under the leadership of His Majesty King Mohammed VI, Chairman of the Al-Quds Committee, insists on the need to refrain from anything that could aggravate the situation in the Palestinian territories and the consequences that could lead the region to more tension, said, Thursday in Amman, Minister of Foreign Affairs, African Cooperation and Moroccans Abroad, Nasser Bourita. The intensification of shameful and illegal practices in Al-Quds Al-Sharif and Al-Aqsa Mosque is due to the spread of malicious hate speech by extremist individuals and groups who claim to have the right to the blessed mosque and the Bouraq Wall, although they are purely part of the Islamic heritage, according to the decision of the United Nations Educational, Scientific and Cultural Organization (UNESCO) on October 18, 2016, pointed out Bourita who was speaking at the emergency meeting of the Arab Ministerial Committee for International Action against the illegal Israeli policies and measures in occupied Al-Quds. In this regard, he noted that what is happening in Al-Quds Al-Sharif and Al-Aqsa Mosque is the inevitable result of systematic provocative practices that continue throughout the year and intensify with the advent of the month of Ramadan. This emergency meeting comes at a time when the Palestinian cause and Al-Quds Al-Sharif in particular, are experiencing difficult circumstances due to incursions and serious attacks that Al-Haram Al-Qudsi and the holy Al-Aqsa Mosque are witnessing, and which have led to terrorize the faithful by injuring and arresting hundreds of them, said Bourita. The Minister stressed that the violation of the legal status in the city of Al-Quds and Al-Haram Al-Qudsi and the attempts to legislate the temporal and spatial division of the Al-Aqsa Mosque and to enshrine this situation in the daily reality are unacceptable and must be stopped for the sake of peace and stability. He recalled, in this regard, that following the recent events in the esplanade of the Al-Aqsa Mosque, and on the high instructions of His Majesty King Mohammed VI, Chairman of the Al-Quds Committee, the Chargé d’Affaires of the Israeli Liaison Office in Rabat was summoned to be informed of the condemnation of the attacks against the worshippers at the Al-Aqsa Mosque and the undermining of the sanctity of the mosque. The minister stressed that the continuation of acts contrary to international law and international legitimacy in the occupied Palestinian territories, including in the city of Al-Quds Al-Sharif, further widens the gap between the Palestinian and Israeli sides, undermines confidence-building measures, constitutes a clear provocation to all Arabs and Muslims, and stirs up extremist tensions that lead to escalation and more violence in the entire region. In this context, Bourita called for the position of Arab countries to be unified and not tainted by sterile bidding on the importance of undertaking an intense diplomatic effort to preserve the holy city of Al-Quds Al-Sharif as a common heritage of humanity, a land of encounter and a symbol of peaceful coexistence for the followers of the three monotheistic religions, as affirmed in the Al-Quds appeal signed by His Majesty King Mohammed VI and His Holiness Pope Francis in Rabat on March 30, 2019. Furthermore, the minister expressed his deep concern and regret after the UN Security Council was unable to adopt a resolution to stop the provocative acts and dangerous escalation in the city of Al-Quds Al-Sharif as a result of the repeated incursions and attacks on Al-Haram Al-Sharif. Along with the call for an immediate halt to any form of escalation in the Holy City, Bourita stressed the imperative of supporting the city of Al Quds and the resistance of its inhabitants, reiterating the full solidarity of the Kingdom of Morocco, under the leadership of His Majesty the King, with the legitimate rights of the Palestinian people to regain their freedom and establish their independent State on the borders of June 4, 1967, with East Al Quds as capital, in accordance with the internationally agreed two-state solution, and its belief in the virtues of dialogue and negotiation as the only way to resolve the Palestinian-Israeli conflict, away from acts of violence and unilateral actions.