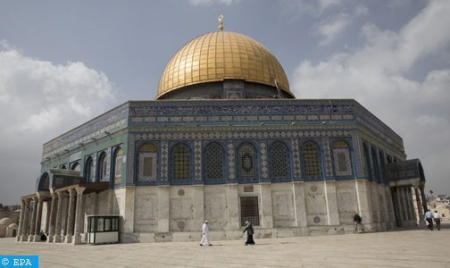 Jordanian news website “Ammon” on Sunday highlighted the major role of His Majesty King Mohammed VI, Chairman of the Al-Quds Committee, in defending the historical, legal and political status of the Holy City and the resistance of its inhabitants. The media outlet underlined that while Morocco considers that the only solution to resolve the Palestinian issue is the creation of an independent State of Palestine on Palestinian land within the borders of June 4, 1967, with Al-Quds as its capital, it rejects at the same time any unilateral measure regarding Al-Quds, and considers it an illegitimate and illegal act, and a serious violation of international law and of the United Nations resolutions. In parallel with political and diplomatic actions, the Kingdom of Morocco is carrying out field work in Al-Quds through the projects carried out by Bayt Mal Al-Quds Agency, as an executive and operational body of the Al-Quds Committee, chaired by His Majesty the King, with the implementation of concrete plans and projects in the housing, health, education and social sectors for the benefit of the inhabitants of Al-Quds with as its main objective to preserve the civilizational identity of the Holy City, to improve the social and living conditions of the Maqdissis, and to support their resistance and their presence in Al-Quds, the source pointed out. The news website recalled that Morocco remains the main funder of the Bayt Mal Al-Quds Acharif Agency, with more than 87% of the total volume of donations received by the Agency. The author of the article also highlighted some aspects of Morocco’s support for the city of Al-Quds, including the financial subsidy for the maintenance of the monuments of the Al-Aqsa Mosque, and “Al Quds Call” signed by HM the King and Pope Francis considering Al-Quds as a holy city and a meeting place, and in which they stressed the importance of preserving the holy city of Al-Quds Acharif, as a common heritage of humanity, to maintain and strengthen the special character of Al-Quds Acharif, as a multi-religious city, and ensure free access to the holy places of the city for the followers of the three monotheists religions. The same source also mentioned the launch of new joint initiatives between Morocco and Jordan with a view to defending the Holy City and protecting it from all attempts to change its historical, legal and political status and its Islamic and Christian religious and civilizational heritage, with Morocco’s insistence on the importance of the historic Hashemite guardianship assumed by the Jordanian King Abdallah II over the Islamic and Christian holy sites of Al-Quds Acharif. The news website also highlighted the projects undertaken by the Bayt Mal Al-Quds Acharif Agency which, in accordance with the guidelines of His Majesty King Mohammed VI, in his capacity as Chairman of the Al-Quds Committee, carries out a continuous work on the ground for the benefit of the Palestinian people in the holy city. The outlet explained, in this regard, that since the establishment of the Bayt Mal Al-Quds Agency, the executive body of the Al-Quds Committee, the value of the projects implemented amounted to more than 63 million dollars, through which assistance was provided to Palestinian populations and institutions in the Holy City, in order to preserve the Al-Aqsa Mosque and other holy sites in the city, as well as its cultural, religious, cultural and urban heritage. It added that the approach adopted by His Majesty the King since the year 2000, is centered on the combination of political and diplomatic efforts and field work within the city of Al-Quds-East, with a view to preserve the Arab and Islamic identity of the holy city, and to help its inhabitants to resist within the framework of an effective plan, which made it the most present Arab and Islamic institution on the ground in Al-Quds. The author of the article noted that Morocco is carrying out development, social and cultural projects, in order to back the resistance of the inhabitants of Al-Quds and maintain their presence in their homes, and ensures more than 86% of the Committee’s budget, stressing that the total cost of the programs and projects approved by the Bayt Mal Al-Quds Agency during the year 2021 amounts to 3.6 million dollars, spread between the education, health, town planning and social assistance sectors.