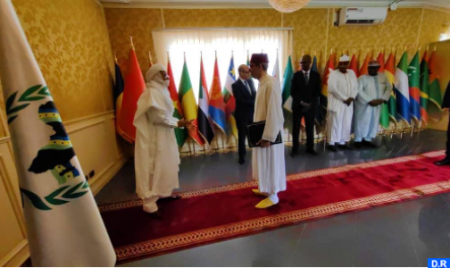 Morocco’s Ambassador to Chad Abdellatif Erroja on Friday handed over his credentials as Permanent Representative of the Kingdom to the Community of Sahel-Saharan States (CEN-SAD) to Brigi Rafini, Executive Secretary of the regional bloc. On this occasion, the two parties had a meeting during which they reviewed the excellent relations between the regional institution and the Kingdom of Morocco, particularly characterized by high-level visits. “I had the privilege and honor to be received by His Excellency the Executive Secretary of CEN-SAD to hand over my credentials as Ambassador and Permanent Representative of the Kingdom to CEN-SAD,” the Moroccan diplomat told MAP. This audience was an opportunity to review relations between Morocco and CEN-SAD and to discuss in particular a number of challenges in their international and regional contexts, as well as the role that CEN-SAD must play to face these challenges, Erroja said. The Moroccan diplomat also discussed with Brigi Rafini the programs and upcoming deadlines of CEN-SAD planned as part of the activities of this institution. The ceremony of handing over the letters of accreditation took place in the presence of the Deputy Executive Secretary of CEN-SAD, Mr. Abderahim Kadmiri, members of the cabinet and directors of the Executive Secretariat of CEN-SAD.