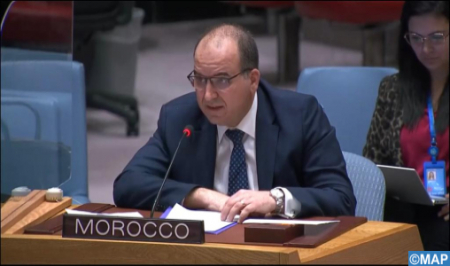 The role of the Al-Quds Committee, chaired by His Majesty King Mohammed VI, in defense of the Holy City and preservation of its identity, was highlighted on Monday before the UN Security Council. “The Al-Quds Committee, under the leadership of His Majesty King Mohammed VI, is constantly carrying out its political, diplomatic and field role in support of the Palestinian people in general and the inhabitants of Al-Quds in particular,” said the Deputy Permanent Representative of Morocco to the UN, Omar Kadiri. During the Security Council’s quarterly general debate on the Palestinian question, the diplomat stressed that HM the King, in His capacity as Chairman of the Al-Quds Committee, is multiplying political, diplomatic and field efforts to preserve the special status of the Holy City. The Al-Quds Appeal, which the Sovereign signed with His Holiness Pope Francis during his visit to Rabat on March 30, 2019, stressed the need to preserve the Holy City of Al-Quds as a common heritage of humanity; a land of encounter and a symbol of peaceful coexistence between the followers of the three monotheistic religions, he said. The Moroccan diplomat also highlighted the field work carried out by the Bayt Mal Al-Quds Asharif Agency, the executive arm of the Al-Quds Committee, under the personal and effective supervision of His Majesty the King, adding that Morocco supports about 86% of its annual budget. Since its establishment in 1995, this agency has worked for the protection of Arab and Islamic rights in the Holy City, supporting and funding several vital projects in the social, cultural, educational, health and architectural fields, he said, adding that these projects have had a direct and tangible impact on the lives of Al-Quds and their resilience. He also emphasized the support enjoyed by the Al-Quds Committee in the international community, including among Arab and Islamic countries, as expressed by the Executive Council of the Organization of Islamic Cooperation (OIC) held on Monday in Riyadh. Referring to the recent Israeli provocations in Al-Quds, Mr. Kadiri stressed that Morocco has condemned these aggressions against the Palestinian people, its sacredness and its religious symbols, while calling for their immediate cessation. The Moroccan diplomat said that Morocco, whose Sovereign, HM King Mohammed VI chairs the OIC Al-Quds Committee, urges to refrain from any act that could exacerbate the situation and cause more tension in the region. Based on HM the King’s concern to support the Palestinian cause and defend the special status of Al-Quds Al-Sharif, the Sovereign had, last Monday, a telephone conversation with His brother His Majesty King Abdullah II Ibn Al Hussein, Sovereign of the Hashemite Kingdom of Jordan, recalled the diplomat. He noted that the talks between the two Sovereigns focused on the developments and events in the city of Al-Quds and the Al Aqsa Mosque following the incursions into the holy places and the attacks on the faithful, based on the Presidency of HM King Mohammed VI of the Al Quds Committee and the Hashemite Trusteeship of HM King Abdullah II over the Islamic and Christian holy places in Al-Quds Al-Sharif. The two Sovereigns considered that this escalation is likely to stir up feelings of rancor, hatred and extremism and destroy the chances of reviving the peace process in the region, he added. The diplomat also pointed out that Morocco, under the leadership of HM the King, reaffirms its full solidarity with the legitimate rights of the brotherly Palestinian people, which is based on international legitimacy and the two-state solution, leading to the establishment of an independent Palestinian state within the borders of June 4, 1967, with its capital, East Al-Quds, and living side by side with Israel in security, peace and tranquility. He also noted that Morocco remains convinced of the centrality of the Palestinian cause in the Middle East region, adding that this issue is a priority in the agenda of the international community. The diplomat cited, in this context, a passage from the message sent by HM King Mohammed VI to the Chairman of the United Nations Committee on the Exercise of the Inalienable Rights of the Palestinian People, Sheikh Niang, on the occasion of the International Day of Solidarity with the Palestinian People (2021). In this passage, the Sovereign affirms that Morocco’s firm position has never been dictated by circumstances and even less by a particular conjuncture. It is not part of debates or sterile political bidding, said His Majesty the King, stressing that the Kingdom’s position is based on an unshakeable conviction and faith that are unanimously shared by Moroccans and is supported by a constant and constructive diplomatic effort as well as by field work in favor of the just Palestinian cause and the Holy City of Al-Quds. Kadiri concluded that Morocco will continue to work to capitalize on its historical and significant role in the Palestinian cause as well as its distinguished relations with all parties and international forces in order to create the right conditions to restart negotiations between the Palestinian and Israeli sides, as the only way to achieve peace and stability in the Middle East.