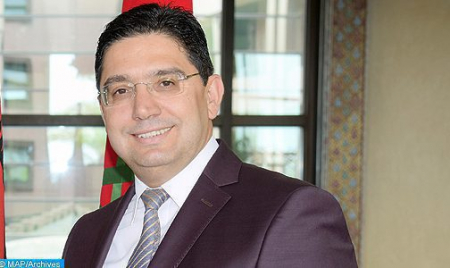 The celebration of the 66th anniversary of the national day of Moroccan diplomacy is intended as a message of recognition of HM King Mohammed VI’s continued commitment and constant efforts in defending national sovereignty and consolidating the Kingdom’s foreign policy, said Tuesday in Rabat, the Minister of Foreign Affairs, African Cooperation and Moroccans Abroad, Nasser Bourita. Bourita noted that this celebration, themed “positive developments in the settlement process of the artificial conflict over the Moroccan Sahara”, is also a message of gratitude to His Majesty King Mohammed VI for His tireless actions to defend the Kingdom’s territorial integrity, and an expression of will to materialize the strategic Royal vision of the Moroccan foreign policy and to strengthen the influence of Morocco at the international level. This celebration is an opportunity to highlight all the achievements of Moroccan diplomacy and the various challenges it faces, he said, noting that it is also a space for debate, to strengthen dialogue around the territorial integrity of Morocco. Moroccan diplomacy, which must be present in training, practice or even in individual behavior, is called to reflect the ambitions of Morocco and the aspirations of its people, in accordance with the strategic and relevant vision of HM the King, said Bourita. For his part, the president of the Moroccan Diplomatic Club, Taieb Chaoudri highlighted the symbolism of the celebration of the national day of Moroccan diplomacy, which is the anniversary of the promulgation by the late HM Mohammed V of the Dahir establishing the Ministry of Foreign Affairs. Morocco celebrates its diplomacy, at a time when it achieves notable breakthroughs, under the enlightened leadership of HM King Mohammed VI, he said, recalling the U.S. recognition of Morocco’s full sovereignty over its Sahara and the message sent to His Majesty the King by Spanish Government President Pedro Sánchez, who considers the Moroccan autonomy initiative as the most serious, realistic and credible basis for the resolution of the dispute over the Moroccan Sahara. In addition, Chaoudri said that Morocco has always adhered to the principles of good neighborliness, emphasizing the royal speech on the occasion of the 22nd anniversary of the Throne Day in which the Sovereign addressed a sincere invitation to brothers in Algeria, to work together and without conditions to establish bilateral relations based on trust, dialogue and good neighborliness. He did not fail to highlight the constant efforts made by His Majesty King Mohammed VI, Chairman of the Al-Quds Committee, to defend the Palestinian cause. Organized at the initiative of the Moroccan Diplomatic Club in partnership with the Ministry of Foreign Affairs, African Cooperation and Moroccans Abroad, this meeting was attended by a panel of researchers, academics and diplomats.