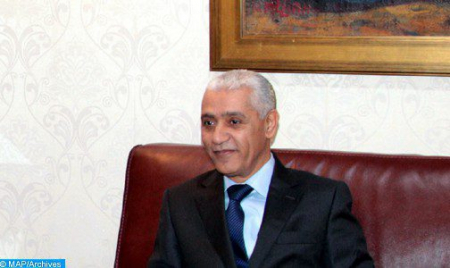 House of Representatives’ Speaker Rachid Talbi Alami on Thursday stressed on the need to tirelessly work on building a forward-looking, peaceful and prosperous Mediterranean area. “It is necessary to work tirelessly and collectively to demonstrate the constant and concrete determination to formulate this modern Mediterranean identity and build a Mediterranean space that is forward-looking, peaceful and prosperous,” he told the Parliamentary Assembly of the Union for the Mediterranean (AP-UFM). Assuming the presidency of the Assembly, Moroccan lower house speaker noted that a “statement on the future of the Mediterranean area is required and more specifically during the Russian-Ukrainian conflict that will surely impact all countries of the Mediterranean.” “This observation is motivated at a time when the world is decomposing and recomposing and it seems more necessary than ever to reaffirm the existence of future prospects for a Mediterranean space that is more interdependent and more united.” In this regard, Talbi Alami stressed the need to undertake a new approach to the future of the Mediterranean area, as well as to mobilize resources with new modalities of intervention. Nevertheless, “attitudes hinder the Mediterranean dream and the collective project of economic development, peace, law and solidarity,” he maintained. He also dwelt on multiple issues of concern and political instability in the region on which depends the future of the countries of the Mediterranean, considering that a “spectator position would be a risk in the shadow of latent tensions and disparities dangerous for this unstable time. Considering that the Mediterranean should constitute in the future a model to promote and dominate the problems of development, Talbi Alami noted that this space, which is a place of passage, exchange and civilization, is also a privileged place to attempt such a brave experiment.