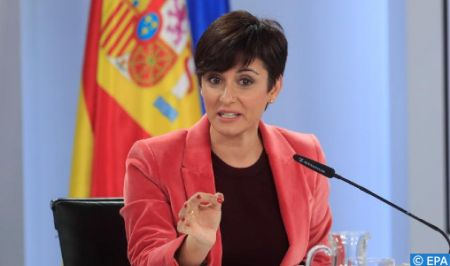 The Spanish government spokeswoman, Isabel Rodríguez, stressed that her country is committed with Morocco to build alliances and partnerships in all areas including that of energy. “We have a commitment with Morocco, a neighboring country, which has many economic, social, political and security implications, and with which we should build alliances and we will also work on energy,” said Rodriguez, who was the guest Thursday night on the program “Hora 25” on radio “Cadena Ser”. “Morocco is a partner and a neighbor with whom we should build good ties,” said the Spanish government spokeswoman, adding that the two countries share important interests. “We have important interests with ramifications in the maritime, commercial and border areas. We should defend the interests of Spain as a whole,” Rodriguez underlined. Asked about the position of Spain supporting the Moroccan autonomy initiative as the “most serious, realistic and credible” basis for resolving the Sahara dispute, Rodriguez, also Minister of Territorial Policy, said that “we should work on a political solution accepted by all parties to resolve a conflict that has lasted for 40 years”. “We cannot turn our backs and wait another 40 years,” said the Spanish government spokeswoman.