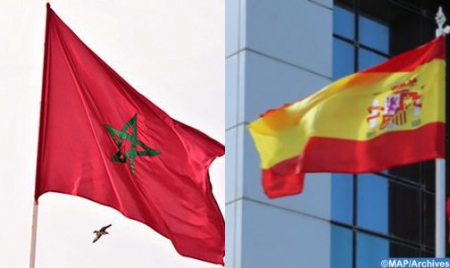 The Morocco-Spain agreement on cooperation in the fight against crime, signed in February 2019 and aiming to address all forms of crime, most notably terrorism, comes into force starting this Saturday, April 30. The agreement, published in the Official Bulletin, aims to promote cooperation between the two countries in the fight against crime in all its forms, including attacks on life and physical integrity of persons, arbitrary detention and kidnapping and crimes against property. This agreement also covers illicit trafficking in narcotics, psychotropic substances and precursors, human trafficking and illegal immigration, sexual exploitation of children, as well as the production, distribution or possession of pornographic material involving children. In addition, Morocco and Spain will extend, by virtue of this agreement, their cooperation to cover the fight against extortion, theft, trafficking and illegal trade in arms, ammunition, explosives, radioactive substances and biological or nuclear materials, among many others. This document also calls for cooperation strengthening to deal with crimes against cultural objects with historical value, as well as theft and illegal trafficking of works of art and ancient objects, theft, illegal trade, forgery and fraudulent use of motor vehicle documents, forgery and fraudulent use of identity documents, cybercrime, and crimes against natural resources and the environment.