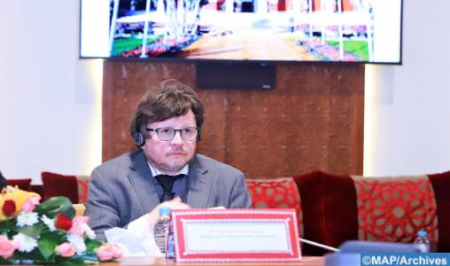 Morocco’s autonomy initiative for the Sahara is the only basis for peace and development in the region, according to Chilean expert in international relations and president of the Africa Latina International Foundation, Antonio Aguilar. “The political reality and the situation on the ground reinforce the conviction that the autonomy initiative proposed by Rabat is the only political framework that can lead to a final solution to the artificial conflict over the Sahara while ensuring development and prosperity” in the region, Aguilar told MAP on the sidelines of the 15th World Social Forum (WSF), taking place in Mexico City. The Chilean expert noted that the Kingdom is committed to implementing its autonomy initiative at the economic and social levels as demonstrated by the major projects underway in Dakhla and Laayoune. These development projects, he said, “reflect the momentum initiated with seriousness and determination by Morocco”. The human development indicators in the Sahara, including those on health, education and housing, reflect these advances, the expert added. The political scientist mentioned, in this regard, the city of Dakhla, which “has become a model of economic development and investment opportunities in Africa.” This supports the realism and credibility of the Moroccan autonomy initiative which extends beyond the simple management of an artificial conflict and goes towards the achievement of the desired development of the region, the expert said. In Aguilar’s opinion, Spain’s recent decision on the Sahara is another reminder of “the seriousness and strong determination of Morocco to put an end to this long-standing dispute, while also illustrating the broad international support for the Moroccan proposal, especially from the world’s leading powers. The expert also described the WSF as an opportunity “to expose the violations and abhorrent behavior of the polisario separatists towards the populations held against their will in Tindouf, Algeria.” The separatist group is a threat to regional peace and stability as shown by the increasing involvement of its former and current members in acts of terrorism and organized crime in the Sahel and the Sahara, he warned. The WSF officially kicked off on Sunday in Mexico City. Held this year under the theme “Uniting the world towards the expression of social movements”, the event is a platform for debate, reflection, formulation of proposals, exchange of experiences and articulation of social movements in a world facing various challenges. Morocco is represented at this event by members of civil associations, as well as representatives of youth political parties, and the National Human Rights Council.