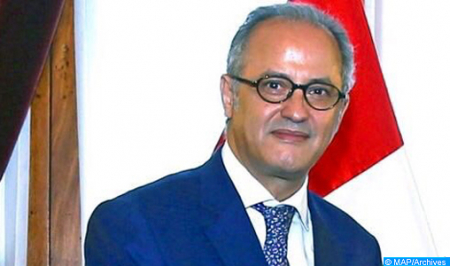 The hosting in Morocco of the meeting of the Global Coalition to Defeat Daesh/ISIS reflects “the distinguished place the Kingdom occupies in the global security architecture,” said Morocco’s ambassador to Italy, Youssef Balla. This major event that will see the participation of over 92 countries highlights Morocco’s leadership at the global level as a “provider of peace and security, especially in Africa, where extremism, organized crime and separatism are on the rise,” the Moroccan diplomat said in an interview published Wednesday by Italian daily “Il Giornale”. With a great experience in the field, Morocco carries out its actions for global security in a multifaceted way, including the fight against terrorism, the fight against extremism and military security, Balla noted. According to the Italian daily, holding this meeting in Morocco is not a coincidence as Morocco has long adopted a firm policy against extremism, which has allowed the dismantling of several radical cells, the paper reported. Thanks to the efficiency of the Moroccan services, several planned attacks have been thwarted even in Europe. This has strengthened the reputation of the Kingdom at the international level, the Italian newspaper concluded.